After one of their best performances in recent history and smashing Spain 5-1 Louis van Gaal’s men await their round 2 match with Australia looking to strengthen grip on the first place. 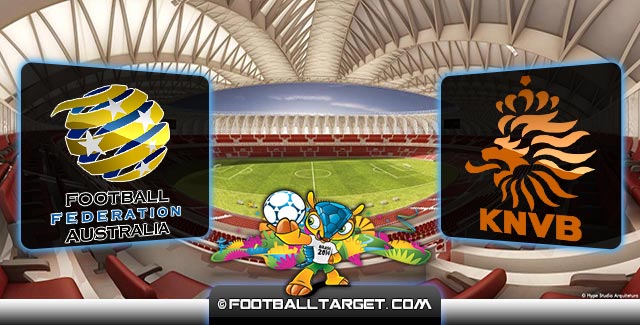 Selection of the Netherlands with a stunning game delighted everyone in meeting with the current world and European champion Spain, celebrating at the end with a high 5:1, while on the other Australia probably expected suffered a 3-1 defeat to Chile.

This will the third match between these two teams, as in the previous two friendly ones Australia have one on in Eindhoven 2-1, and drew one in Rotterdam 1-1.

After losing to Chile 3-1, Australia boss, Postecoglu have to find a way to take at least a point against Oranje. Friendly games are one thing, and further both teams have changed slightly. Defensive tactics to withstood Robin van Persie and Robben is a must do, but unconvincing defence shown a lot of mistakes against Chile, so McGowan and Holland could start from the start, especially as Franjic had torn his hamstring against Chile Still, knowing that he can’t stop all the players, Postecoglu aims to attack Dutch stars.

Australia midfielder Mark Bresciano believes that his team have more to say at this World Cup :D “We have all experienced what the World Cup is all about now and we will be ready from the first minute”.

“We are here to try and make history. We want to make a statement in this World Cup.”

While Louis van Gaal decided to go against Spain with a 5-3-2 formation, most probably he will change it to his classic 4-3-3, which means a few rotation in the team. The reason is, Australia is not so offensive as Spain and he will aim to take all three points and practically seal their progress into the next stage. Another reason for attacking Australia is that with the first place in the group, they will avoid playing with the first placed team of the group A, which should be the host, Brazil.

It wasnt all so great against the Spaniards, as Dutch were behind 1-0, and Cillessen saved some great shots. Louis van Gaal has seen and changed a little approach of his defenders and Robin van Persie and Robben had a superb night and completed amazing comeback. The same is to be expected from their two biggest stars against the Socceroos.

Match Prediction : While Australia conceded their third goal only in the stoppage time, and had a chance to equalize against Chile, Netherlands after trashing Spain are flying high with the confidence and anything but a new win would be a big surprise.