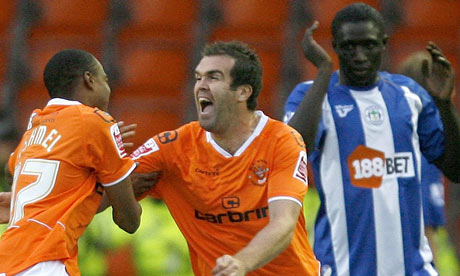 Bloomfield Road will witness Premier League match time for the second week in succession, when Blackpool host Wigan in match week 33 on Saturday, April 16.
The game will be the second of a two-legged contest, between the sides, of their Premiership campaign. The first, hosted by Wigan on August 14, 2010, ended 4-0 in Blackpool’s favour. It was a dream start to Blackpool’s Premiership debut, as Harewood scored a brace in his team’s rout of Wigan. It was a surreal start for the Bloomfield Road squad, reminiscent of Burnley, who beat Manchester United at home and followed it up with a win against Everton in the next game they hosted. But Burnley’s dream was short-lived, as they were relegated at the end of the season. To Blackpool’s credit they are still out of the relegation zone, albeit only just.
Taylor-Fletcher put Blackpool ahead on 16 minutes, and Harewood’s twin strikes on 38 and 43 minutes saw the visitors go into the interval 3-0 up. With 15 minutes left in the game, Baptiste completed the tally.
Wigan’s previous season ended with a 8-0 thrashing at the hands of champions Chelsea, and the result against Blackpool showed the hosts hadn’t recovered from their hang over. They appeared unmotivated and uninventive and totally devoid of spirit. Their defence was ramshackle, and their game lacked organization, quality and leadership.
For Blackpool, Gilks between the posts was impressive and he was helped by Baptiste and Cathcart who were solid in the back-line.
Head to head, Blackpool have won the only league game played between the sides.
In their last 6 league games, Blackpool have registered a win and a draw apart from 4 losses; Wigan have also won just a solitary game out of their last 6, while losing 3 and drawing the remaining 2. Of their 15 home games this season, Blackpool have won 4, drawn 3 and lost 8, while Wigan have won 2 of their 15 games on the road, while losing 7 and drawing the remaining 6.
In match week 32, Blackpool lost 3-1 to Arsenal at home, while Wigan lost 1-0 away to Chelsea.
Saturday’s game is in effect a relegation battle, with Wigan at the cellar of the table, and Blackpool just two points adrift, in sixteenth place. Both sides will be desperate to bank three full points, and that should make for an enthralling game, with the hosts holding a faint edge.
Blackpool’s starting eleven against Arsenal had the following players: Kingson, Baptiste, Evatt, Cathcart, Crainey, Adam, Southern, Taylor-Fletcher, Puncheon, Campbell and Varney. Kornilenko, Reid and Phillips were used as substitutes.
Wigan had the following men in their starting eleven against Chelsea: Al Habsi, Boyce, Caldwell, Alcaraz, Figueroa, Watson, Diame, N’Zogbia, McCarthy, Cleverley and Rodallega. Sammon, Moses and Di Santo featured as substitutes.
Article Source: http://EzineArticles.com/?expert=Suresh_Iyer