Another terrific match expect us in Champions league, this time in Dortmund, because after a bit of a surprising victory of Borussia 2-1, in London, the situation in this group got complicated.

In front of that match, Borussia was at a disadvantage situation and Arsenal looked fantastic. Now, Gunners have imperative, not to lose this match.Their approach certainly wont be a defensive one, and to open a lot meaning, a gamble as Dormund would know how to use it with their great forwards.

So far these two teams have met in Dortmund twice and Borussia have won and drew one match.

Borussia plays really great, and just as importantly, very efficient. So far they are the team which scores the most goals in Bundesliga, and in particular this is true for domestic matches in which Borussia scores on average over three goals per game and all six home meetings Klopp´s players have been solved in their advantage.

The German side, is currently on the run of four straight victories, where the last one at Signal-Iduna-Park against Stuttgart was very convincingly, especially when it is know that Stuttgart recently was a tought side to break for Dortmund.

Even more impressive are away victories, the one mentioned in London, and against their great rivals, Schalke 04. Striker Lewandowski is back in great shape, but aslo the new signings Mkhitaryan and Aubameyang proved to be a well spent money. .

On Friday, Subotic was a little rested, and Aubameyang came off the bench, while now both are likely to be starters. Piszczek and Gundogan due to injuries are sidelined.

Arsenal does not have a long series of victories behind him , but can not be said the Gunners play bad. They had many games without defeat, which ended just Borussia in London, after which as hosts they lost by Chelsea in the League Cup match.

Arsenal defeated away Crystal Palace 2-0 and Liverpool with the same score on Saturday , which is definitely good for confidence of the players. These results also strengthened Gunners on the first place of the Premier League with five points more than the second placed, Chelsea.

In addition, the game of Arsenal has improved with a return of midfielder Santi Cazorla after an injury, and the Spaniard already scored a goal.It was an opener against Liverpool.

Injuries continue to follow Arsenal, and the list of absentees for this reason again is a little bit longer. Gibbs injured against Liverpool and is unlikely to play in Dortmund, as well as Wilshere who didn’t played on Saturday.   Flamini picked up injury away against Crystal Palace, and from earlier Walcott, Diaby, Podolski and Oxlade-Chamberlain are sidelined. 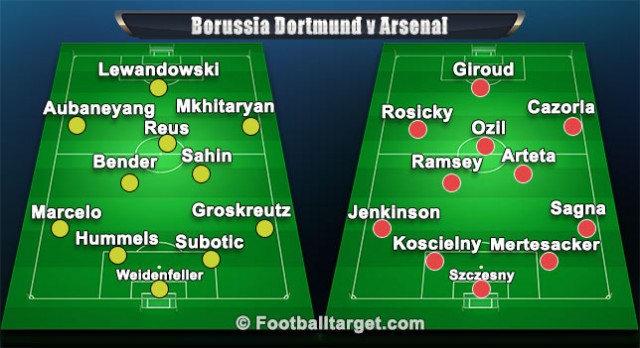 A very important match for both teams, with a psychological advantage to the host. Arsenal wants a revenge for the defeat in London and will certainly attack, and try to score which suits  to Borussia. This is a reason why we could see more than 2,5 goals.