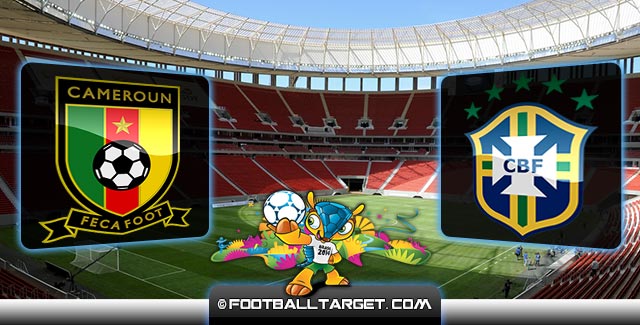 Luiz Felipe Scolari is going to line up the same team he put in the first two matches , even their performance was a little disappointing. The Selecao hopes that Zenit striker , Hulk will be fully fit for tonight game.

As always they key player for Brazil is expected to be Neymar. All Brazilian fans expect a good game from him tonight. Neymar has only scored 2 goals in this World Cup, both of them vs Croatia in the opening game.

As mentioned , Brazil isn’t expected to make any change in line up or tactic, so they will play the 4-2-3-1 as always. The only possible change may be Willian in place of the injured Hulk. Also a big concern is the form of Paulinho and Marcelo, the last one scored an own goal vs Croatia.

Cameroon
This has been a poor campaign for Cameroon , also with high tensions in the squad. First Cameroon played refused to travel to Brazil since they did not get the financial reward that was promised. And later than on Cameroon vs Croatia match ,Alex Song strange behavior, where he got a red card for throwing a ridiculous elbow at Mario Mandzukic. Then later at the end of the match Assou-Ekotto headbutted his own teammate Benjamin Moukandjo.

Cameroon coach is expected to make some changes at the starting line up since last match. Assou-Ekotto is not expected to play as he’s banned for his behavior, Alex Song for dismissal and Samuel Eto’o for injury problems.

Last match Cameroon won in a group match of World Cup was in 2002 vs Saudi Arabia.

Cameroon has the longest losing streak than any other African team, 6 looses in a row.