One of the world biggest derby matches, the El Clasico between FC Barcelona and Real Madrid CF takes place unusualy at the start of the season, where the points are not the crucial ones. However, things could look different, if Barcelona have not failed the last weekend by playing only 0-0 against Osasuna. To reflect, Real Madrid have won and manage to cut the gap to only three points, meaning with a victory in El Clasico, Real Madrid can share the first place with the Catalans. Still, if they lose, things for the Los Blancos after spending millions on the new players this summer, would not look so good, and Barcelona can open up a six-point lead.

During the week in the Champions League both teams played against Italian giants and again Real Madrid celebrated against Juventus 2-1, and Barcelona drew away against AC Milan 1-1 .

In their mutual matches, Real Madrid has more success in recent times, especially at the Nou Camp, where they drew last season, won the year before, and they celebrated last season in the Cup.

With two related draws FC Barcelona welcomes their biggest rival and it can not be said that this is exactly a good time for the Catalans, especially because until the last weekend Barca was on a run of eight consecutive League wins, with two in the Champions League.

Consolation is that still the Catalans have not been defeated, counting and two draws against Atletico in the Supercup. Last Saturday they played in Pamplona against Osasuna and only drew without scoring any goal, what happened to them the first time in 64 matches.

That match, coach , Tata Martino started without Messi, who recovered from Injury. However, In the second half Messi enter the game, but the score didn’t change. Against AC Milan, Messi started and scored an equalizer. For El Clasico, Messi certainly will be in the first eleven.

Due to the injury for some time Jordi Alba is out and Adriano covers position of the left side-back. A new problem is that Pique picked up an injury and he is doubtful for the derby, so Puyol could play.

Real Madrid in any case in better shape awaits a big derby game. After the defeat of Atletico , Los Blancos lined four wins , reduced the gap to Barcelona, and in the Champions League they have nine points (three wins) , in other words, Real Madrid almost resolve the placement into the next round .

Still a lot of this wins are with minimal score, , and in some matches it looked like they have a little help from the referees. Against Levante and Juventus.

The most important thing for Los Blanco is the form of Cristiano Ronaldo and Di Maria which is supreme.

Coach Ancelotti has decided to rest midfielder Isco against Juventus, and Illarramendi has played paired with Khedira in defensive midfield , while Modric was somewhat offensive .

After a long time on the goal again was Casillas , although at the Nou Camp probably again Diego Lopez will be a starter. Isco will return , and it is possible that the recovered Gareth Bale jumps in instead of Di Maria , or instead of Benzema , so in this case Ronaldo would be the striker. 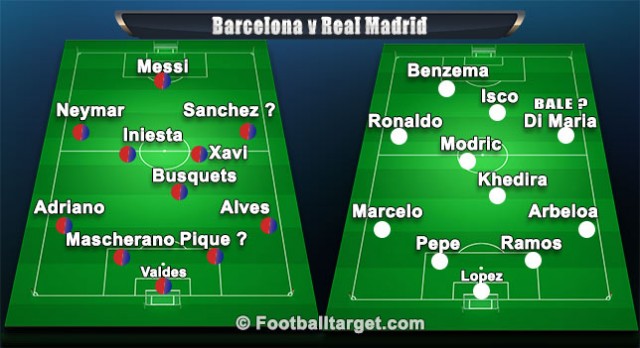 – Los Blancos have scored 13 goals in their last six visits to the Nou Camp combined (2.1 per game)

– Since a 5-0 demolition in 2010 at the Nou Camp, Real Madrid have scored everytime at least a goal

– If Lionel Messi scores at least a one goal, Messi will overtake Alfredo Di Stefano as the top scorer in the history of Clasicos (18).

– The Portuguese, Cristiano Ronaldo has scored in Real Madrid’s last six visits (eight goals in total) to the Nou Camp in all competitions

– Since February (0-1 in Granada), Real Madrid have not lost a league game away from the Bernabeu

Match Prediction : Stake maybe is not so big now, because of the early stages of the championship, but in games like these always players always give their maximum, so we can expect to see some goals. Over 2,5 goals. Another betting tip here is Real Madrid to score, and the best odds for this are at BET365 and where you get a 100% bonus.