Germany and Algeria will face each other today at Beira-Rio, Porto Alegre. The Three time winners are considered as the main favourites of this match, but they has been lately criticised for their performance at group stages.Meanwhile Algeria who has made a great campaign so far , may be a potential thread for the Joachim Löw’s side. 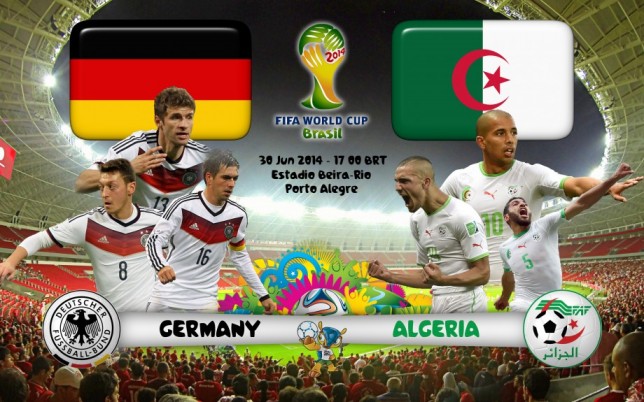 Germany
Germany has been considered the favourites of winning the competition since the start and so are they even now. Joachim Low team did put some poor performance in the group stage even though they did finish at the top of the group. Germany won the opening game vs Portugal 4-0 , thanks to Muller hat trick and a little help of the referee mistakes. They struggled vs Ghana , where they legendary striker , Klose saved them from a possible loose.

Löw is not expected to make any tactical or line up change for this match. He’s going to play with the typical 4-5-1. Benedikt Hoewedes and Jerome Boateng has performed well as full backs even it’s not their favourite position. Anyway they do look a little slow wich is not typical skill for a full back. Lahm is now confirmed in the midfield who has been making a great job in his new role. Meanwhile in attack Muller has done a great job as goal scorer , scoring 4 of them in group stages. Ozil and Goetze has done both done a good job on the wing.

Algeria
Algeria has been the best african team performer so far , after finishing second at Group H. Algeria was unlucky at the opening game after loosing 2-1 vs Belgium. They was leading the game for ~50minutes after Feghouli turned in a goal the well-earned penalty. They did beat South Korea in the second game , 4-2 and took a well earned draw vs Russia.

We’ve seen 3 different looks from Algeria. A defensive team (vs Belgium), through combative team (vs Russia) and into all-out attack team(vs South Korea). They will possibly play a 4-3-3 tonight vs Germany, a counter-attacking style of play since Germany struggled a bit when they faced such tactics.

Facts
Germany and Algeria faced 2 times each other, with Algeria winning both of matches.

Germany have reached the semi-finals of the last three World Cups.

Klose need one more goal to be the top goal scorer in all World Cup history [16goals total].

Germany attempted 1990 passes , being the first team of doing so in the group stages.

Algeria are the second African team that is still in play in this World Cup.