After several bad results in Premier league,Harry Redknapp Spurs will try to boost their confidence in FA Cup in match against Bolton Wanderers.
Spurs manage to reach quarter-finals with home win against Stevenage 3-1.On the other hand Bolton will try to do the same as confidence will be important for them in battle to avoid relegation from Premier league. On their last eight matches at home in FA Cup Spurs have lost only one match and they manage to score at least one goal in every one of them – 27 total.

Tottenham manager Harry Redknapp would love to win FA Cup competition again,as he do it in 2008 with Portsmouth,and he believes that this Spurs team,have a capacity for doing it.

“It’s a great tournament and we want to go all the way to Wembley now and win it.” 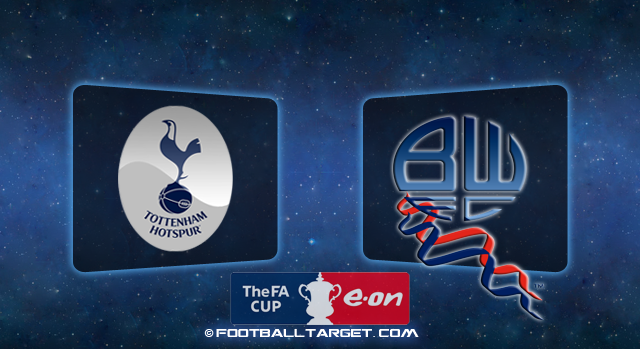 On the other side,Bolton manager Owen Coyle is hoping that Bale will have an off day.

Coyle : “Gareth Bale is an incredible player and that’s why he is coveted by the top clubs in the world – they would all love to have him in their team.

“Tottenham invested in him as a young player and have been very shrewd in that, he’s very exciting and a player I personally love watching every weekend.

“I just hope he’s not at his best on Saturday but there is no doubt he is a terrific player who can pop up in so many different positions on the pitch.

“When he’s at the top of his game he is one of the world’s best players.”

Tottenham team news : Emmanuel Adebayor is a doubt due to a hamstring injury,Aaron Lennon remains sidelined due a hamstring problem , Ledley King (knee) will have a fitness test.
Michael Dawson (ankle), goalkeeper Heurelho Gomes (knee), and midfielder Tom Huddlestone (ankle) are out.

Bolton team news : Chris Eagles is a doubt , Marvin Sordell is cup-tied,Marcos Alonso is in contention for his first game in three months,Jussi Jaaskelainen should return on the goal.

Prediction : After several bad results in Premier league,3 straight loses,Redknapp boys have chance to come back on wining strike,and home game against Bolton is the just right place to start it.Spurs have better team,and if they want to reach final ,must win today its the thing to do for them.Spurs to win.