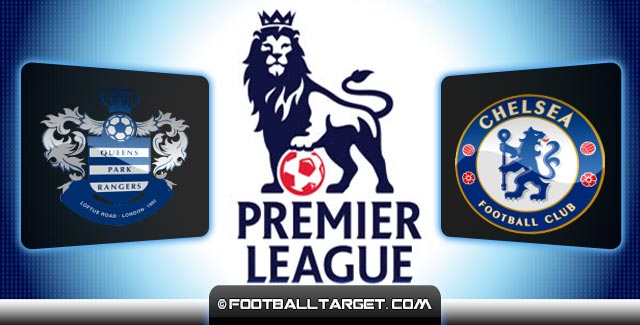 Queens Park Rangers with four points from the last two games awakened the hope that they can avoid Premier league drop, while the league toppers Chelsea FC at Loftus Road coming hoping to maintain the gap between Arsenal and two Manchester sides without their first goal scorer Diego Costa who will be out for the next four games. In the last three games vs QPR, Jose Mourinho’s side have celebrated only once. That was in the last home game vs QPR with 2-1, while before that they lost previous home game 1-0 and drew at Loftus Road, 0-0.

A west London derby. is on schedule for this Saturday and QPR desperately need a win over their the Blues. Any points will help their battle relegation, considering that Chris Ramsey’s side are two points off safety, while Chelsea sit four points clear of Gunners at the Premier league with two games in hand on the Gunners.

QPR will host Jose Mourinho side this weekend at Loftus Road Stadium. QPR is encouraged from the last two games as they have scored 7 goals and won 4 points. Another good result would keep them closer to get away from the relegation zone.On the other side , a win for Chelsea would get them closer to the title, that they’ve not won since 5 years.

QPR
Chris Ramsey will probably play with the same team he faced WBA and Aston Villa in the last two weeks. The QPR boss hopes that his team would get a good result in this tough game and he stated that this fixture its more important for QPR than it is for Chelsea.

“That’s a fair assessment,” he remarked. “They can afford to have a blip and still win the league. We really do need to pick up every point that we can.

“It’ll be a very, very tough game. Hopefully an enjoyable game for the fans, but not too enjoyable for the neutral because I hope that we can do well and collect all the points.”

It will be tougher for Ramsey’s side to win the derby as Eduardo Vargas , Rio Ferdinand , Leroy Fer and Richard Dunne are sidelined. Taarabt is also in doubt for this match.

Chelsea
Jose Mourinho’s side are just 4 points ahead of their challengers Arsenal but they still got 2 more matches to play.The Blues are running in a good form as they’ve not lost on their last 10 league games.

Jose Mourinho admits that there are not easy games anymore. He also stated that QPR are a tough side and at Loftus Road, with their atmosphere it will be even tougher to get any good result.

“This is obviously a very important match for both teams,” Chelsea boss Jose Mourinho told reporters. “We know that, we know they want to win. Nobody is expecting an easy match.

“I know QPR have played one match more than the teams they are competing with and everyone knows they need points in these remaining six matches they have, so we know it’s a difficult game.”

The Chelsea boss confirms that Cesc Fabregas and Matic will be playing this weekend despite they’re in a 2 matches ban risk and they could miss the games against Arsenal and Manchester United.

Diego Costa will be the only missing player for the blues as the Spaniard striker is sidelined after picking a hamstring injury last week against Stoke City.

Chelsea boss José Mourinho will risk central midfielders Cesc Fàbregas and Nemanja Matić against Queens Park Rangers on Sunday despite the pair being a yellow card away from missing potential Premier League title deciders against Manchester United and Arsenal.