Harry Redknapp’s men welcome Manchester United looking to bounce back from another away defeat, but the task they face this Saturday wont be an easy one as the Red Devils are on the same mission after losing home points to Southampton. 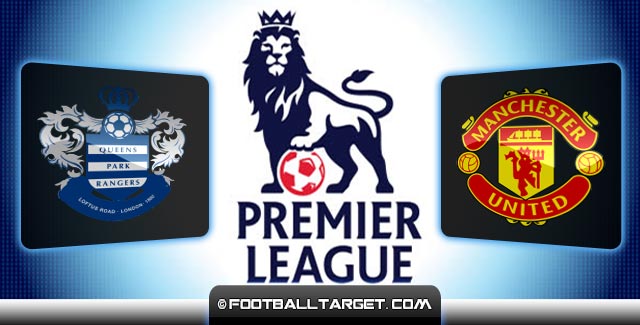 Queens Park Rangers F.C. are one of usual “rookies” in the league which aim to survive the season and to avoid relegation. To do this, winning home points is a must do thing to avoid a drop. QPR is doing exactly that so far. Redknapp’s side rarely lose at home but yet they did not picked any away points. Mutual history with Manchester United suggest that QPR as we said before will face a tough task as since 1992, Rangers lost to Red Devils 16 of the last 19 matches. The remaining three ended with a draw.

Harry Redknapp’s side lost only two home games, meaning their home form is reliable,-5 wins , 4 draws and 2 defeats, but the question remains, would that be enough to avoid Premier league relegation. Home wins against Swansea City and Crystal Palace, away defeats to Arsenal and Burnley were the last four games for QPR all together spiced with the FA Cup elimination by Sheffield United. All this leans toward QPR’s relegation if they don’t raise their form on a constant level. For further insight you can refer to up to date soccer betting odds to monitor QPR relegation/survival.

At Loftus Road Stadium this Saturday comes Manchester United, so QPR will have to up their game if they want to pick any points this round. That one bad thing does not come alone, suggest the recent rumours by the English Media which report the news that this might be Redknapp’s last match as QPR Boss if his team lose to Manchester United.

– I do not know what to say about these rumors, but let’s wait until the end of this match with Man Utd.

– So far I’ve had a great relationship with the leaders of the club, and this week I spoke with the President Fernandes, and the emphasis was only on how to win as many points.

– Manchester United are a great club, which invested a lot recently in their team, but if we give our best, then, we can achieve our plan.

Louis van Gaal’s side fell into a bit of a crisis that culminated in the last round with a home 1-0 defeat to Southampton, along with the fact that for the first time since 2009, his players at Old Trafford failed to make a shot at opponents goal. Man Utd were a better team, but the Saints defence were excellent. With this defeat Southampton jumped to third, while United fall to the fourth with two points less. The bad news for United is that Arsenal came close to only one point. This means that the Red Devils would have to be sharp until the end of the season if they want to avoid watching Champions league from TV for the second year in row.

Loaned Falcao and Robin van Persie are not in form, so the reports that this summers they will look for another clubs, does not surprise a lot. But, currently the Dutch boss relies on them, continuously combines and experiments, changing the position of the players, as well as Man Utd’s game system in order to find a game that would bring victory in the series like the one of 8 straight wins which the Red Devils had until a month ago.

After three away matches at which United won only a point per each, Van Gaal expects that his team in London finally grabs all three points.

– Some say we dont have a special quality or style and that my Man Utd does not look like the old United.

– However, this is not the old United, now we have a new style, and under new coach we’re doing our best to bring back Manchester United where he belongs – said the Argentine midfielder Angel Di Maria, who in the last round after recovering from an injury played as AMF which he could play this Saturday considering that RVP is doubtful (ankle), so the Man Utd captain Rooney will lead the Red Devils attack. Except Robin van Persie Louis van Gaal cant count on Marcos Rojo (thigh), Rafael da Silva (fractured cheekbone) and Ashley Young (hamstring).

– Before the match with Aston Villa and Southampton I said that we can be champions, if we beat them, we failed to do it so it remains to fight for the Champions League places. This means that today we have to beat QPR, said Louis van Gaal.