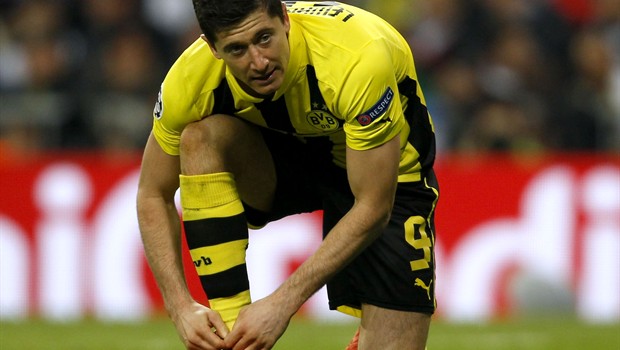 The current contract of Polish football player and Borussia Dortmund attacker expires next season, and it is quite certain that this summer Lewandowski will leave Dortmund. German media continues to claim that everything is arranged with Bayern although the Bavarians have denied it. Long time ago as the possible new destination for Lewandowski was mentioned and Sir Alex Ferguson˙s Manchester United, and now, it seems, Real Madrid have joined a race to land this striker at Santiago Bernabue according to the Spanish Marca.com.

Lewandowski burried Real Madrid in the semifinals first leg match of the Champions league in Dortmund with four goals,while a few minutes after the second match which Real Madrid won 2-0,President of ‘Royal Club’ Florentino Perez approached Lewandowski and took him to one of the offices at the Santiago Bernabeu, relatively close to the locker room. The pair kept talking about ten minutes, and Perez made ​​it clear to a 24-year-old attacker that he wants to sign a contract with him. Marca claims that Lewandowski has not rejected the idea, although in principle he agreed with Bayern.

Still it remains uncertain where eventually Lewandowski will end up ,but probably we will found out after the Champions League final which Borussia and Lewandowski are playing at Wembley ( 25th May) against Bayern Munich.