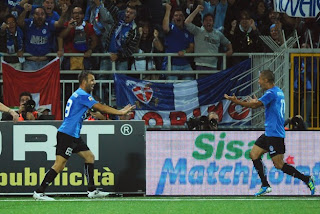 Novara get first win in Seria A after 55 years,and for Inter the crissis went even depper.After played just three games in Serie A Inter have only one point.
Th First match of Serie A fourth round offered a big splash.Novara,newbie in Serie A on the home court defeated Inter Milano 3-1.The first goal of the match was scored in 38th Riccardo Meggiorini minute

In the near mid-court ball Esteban Cambiasso lost a ball, which mistake Novara convert to 1-0 lead.
What followed was a counterattack that was completed Meggiorini nice shot, and from about ten feet slightly askew to the left side in the opposite corner of the helpless Julius Cesar. Assistant to the goal was Andrea Mazzarino.

Second goal fans waited until 86 minute when the striker Marco Rigoni scored from the penalty that was previously won Takayuki Morimoto .Penalty concede Andree Ranocchim who gets sent off.

Cambiasso reduce the score to 2-1 in 89 minute by beautifull shot from about ten meters.Final score was set in 91 minute when Rigoni scores his second goal.