In thriller match,after  the controversial Sunday´s derby ( in the Premier league),Chelsea have won in the Capital One Cup and so reached the quarter-finals where the Blues will play with Leeds United.

But it wasnt an easy victory,as the guest from Manchester three times had a lead,but the Londoners each time have managed to bounce back in the match.

In the great match,or may we say a thriller one after the yesterday´s epic comeback from Arsenal against Reading from 1-4 to 7-5,surely 21 goals in two matches,put the Capital One Cup competition this week in outstanding competition. 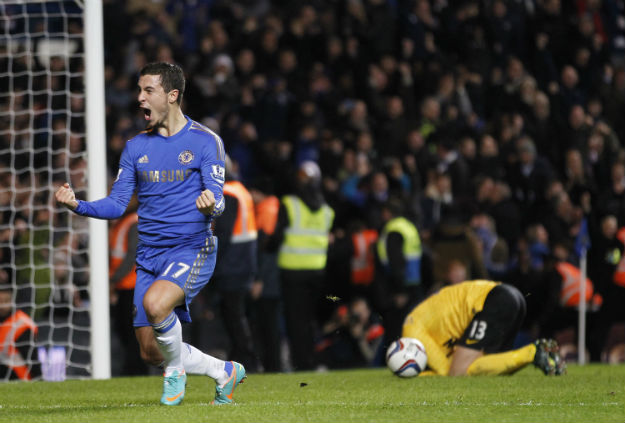 Both coaches Di Matteo and Ferguson have mixed the teams in relation to that three days earlier played league match, which was also played at the Stamford Bridge, but at the re-match again was lacked of nothing,lot of goals,great match,lot of turnarounds..

It was one of those matches, “Why We Love Football“, because how else to call the match with nine goals,three comebacks..and complete reversal.

The guests in the 22nd minute in the lead has brought indestructible Welshman Ryan Giggs with measured shot to the lower right corner of Petr Cech. Only nine minutes later Alexander Büttner made a penalty from which the Brazilian David Luiz has equalized to 1-1.

When it seemed that the teams on break will go with 1-1, Javier Hernandez scored for guests after a nice through ball from the Portuguese Nani.

Only seven minutes of the game in the second half, was necessary for Chelsea to level the result again.Gary Cahill has scored with a header on Mata´s corner kick.

Seven minutes later,the guests for the third time came into the lead.This time Nani himself was a scorer.

It looked like United is going to the quarterfinals, but then came the first of two errors of United’s young defense, this time from Scott Wootton.

In the 93rd minute,Wooton pull back Ramires inside the penalty area,and the referee Lee Mason had no choice but to show on the white spot.Eden Hazard steps in and scorer for 3-3 and extra time.

Similar thing happened on Tuesday´s night when Arsenal have scored in injury time after which the Gunners in the end also have won the game.

Another fatal moment for United, this time for 19-year old Michael Keane, occurred in the 97th minute when Kean has tried to pass the ball to Lindegaard, but he did it very badly.

The ball has taken Daniel Sturridge, bypassed Dane and scored for 4-3. The final blow to Man United has struck Ramires in the 116th minute.

United in the last-minute of extra time (120), reduced the score to 4-5.Ryan Giggs again was a scorer but this time from the penalty kick.

Surprise of the evening have prepared football players of the Welsh Swansea who as the guest with a 3-1 were better than Liverpool. Chico has put the guests ahead in the 34th, Nathan Dyer raised to 2-0 in the 72nd minute..

Luis Suarez in the 76th has given a hope to Liverpool, and the same in the fifth minute of injury time Jonathan de Guzman has shut down.

Surely it worths to mention the relegation of Tottenham Spurs on guest appearance at Norwich, although until the 84th minutes they had a 1-0 lead.

Then,first Vertonghen has scored an own goal for the 1-1 and just three minutes later, Simeon Jackson sent Norwich in the quarterfinal match.Norwich will play with Swansea.Gareth Bale in the 66th minute has scored for the Spurs.