The second match of the first day of European Championship is also from the Group “A” and also will be played in Poland, but in Wroclaw. According to most of the announcements, in this meeting the favourite is even more pronounced, although it is interesting that the bookies do not really think so. 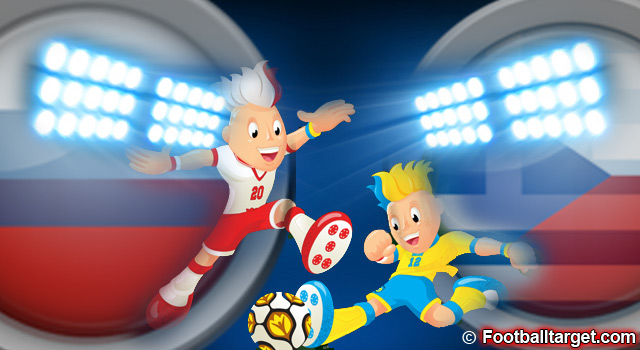 Way through the qualification reveals that the Russians were first in their group, and the Czechs with a lot of luck reach the second place and so fought their way on the Euro 2012,through the barrage of placement. Friendly matches ahead of Euro, especially those last, also show who is in better shape.

So far, they met only once and again at the European Championships in England in 1996 and then in the “crazy” match was 3-3. However, it was another Czech, then the championship finalists …

Immediately after the groups draw, Russia had to accept the burden of favorites in this group. It simply imposes a so, so it is clear that the Russians themselves do not escape from it.

Rather, they believe they can and a lot more than the quarter-finals, and some of them,are so optimistic that they will say ,that championships for them begin in the second stage. Probably then will wait them some stronger selection, as an opponent,than Czech, but before that,of course they have to play three matches.

According to these announcements, this should be the easiest game for them, where they dont think about some draw or defeat. Winning at the start is always a big boost, and the last friendly match should also be a huge morale boost for them.

They beat Italy with 3-0 which automatically erased very pale game against Lithuania where they played 0:0. Almost,it is impossible to beat them lately, which has happened the last time there at the beginning of the qualifications from Slovakia in Moscow.

Many will say that the power of Russia is a strong domestic league, which really belongs to the European top themselves, perhaps even side by side to the French Championship.

All the first lineup players and almost all invited are playing in the homeland, which is deployed around so that the defense are CSKA players while in the midfield and attack are players from the champions Zenit.

Dutch coach Dick Advocaat has had some problems, so fall off ,because of injuries Vasili Berezutsky and Igor Semshov, where the only real handicap is the lack of V.Berezutsky.

Still more of some players have had minor problems with injuries,but they were rehabilitated ,so against the Czechs the strongest available team is going to the pitch, although there is a dilemma between the keepers Akinfeev or Malafeev.

The Czech Republic is already accustomed to the fact that on the great competitions are coming with the role of outsiders, so they probably do not mind it, and maybe even that suits them.

There are no expectations and pressure on them, so they can just play and believe in their capabilities. Very little is left from their glorious generation of players, and they are in older age,but what is worse, there have big problems with injuries.

In three friendly match experiments ahead of Euro, they manage to win only once,against Israel in extra time,while in Prague against Hungary in the main test for Euro 2012 they were very unpleasant defeated.
That game actually revealed all the weaknesses and shortcomings of this representation, although the coach Bilek tried with something offensive appoach on the ground.

None of these matches did not play their best player Tomas Rosicky who is struggling with injury, and is so important that Bilek did not give up on him,and rather he is waiting for his recovery.

Supposedly Rosicky will be ready for the Russians, but the question is how well he can play after the break. And that’s not all ,because the other big star, striker Milan Baros has a problem with the injury to, which he suffered against Hungary, so probably he will miss the first match, unless Bilek dont take some risk with him.

Thus remains in a team only one big star, goalkeeper Peter Cech who certainly will have a lot of work, especially in this game.

Czech will definitely play in a closed variant of 4-5-1, and instead of Baros will probably be a striker Tomas Necid, who plays for CSKA Moscow, and well-known opponents.

Prediction : By us the Russians are the big favorite in this match, so the only thing which is a bit confusing is that we have great odd for their victory.
Czechs poorly played friendly matches and qualifications , and now they still have problems with injuries of key players. With the Russians everything is ok, and they have much larger selection of players in all positions. Even the draw will be surprise here.So Russia to win.

Watch match between Poland and Greece from ours live stream section