April 29, 2012 9:00 AM EDT
Stadio Comunale Artemio Franchi – Montepaschi Arena — Siena
Match : Siena – AC Milan Serie A
Referee:‬ C. Brighi‎
Siena, which is located right in the middle of the table, can not forward nor backward. At least not essential, a spot or two up or down does not change anything important, Siena will not in Europe nor in the second League. Milan will certainly go into the Champions League, but they would like to go there as champions of Italy, not from second position. 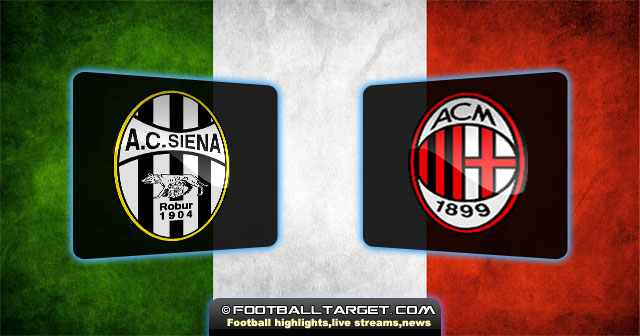 Not much missed that Milan in delayed round played in mid week, at their stadium against Genoa waste another 2 points and so probably lose all chances for the championship. Fortunately for them at 86 minute, its shows their savior Kevin-Prince Boateng who scores and so left Milanese in the game for the title. Unfortunately for them, Juventus also in the finals of the match in Cesena reached a victory,so AC Milan remained still 3 points behind them. Siena is unpleasant opponent, they are in good shape in the last 4 rounds ,where they won three times and not just unharmless opponents,where they were better against Udinese, Atalanta and Genoa.

AC Milan coach,Allegri : “I’ve not given the future a second thought because we are still in the chase for the league. I like to think we have a good chance to retain the title. It’s true it depends on Juventus but we have the obligation to keep on trying until the end.”

If we look at past meetings against Milan Siena for 5 years does not know for anything other than defeat, 6 wins and a goal difference 16:3 in the favor of Milan in the last 6 meetings, show clearly who is the favorite in the this match. But already on emblem of Siena we can seen who is their friendly club, so surely they would liek to help them with taking some points today from Milan.

Full match highlights and full match video will be available after the match.