The third day of the European championship,brings us the match from Group C , and return to Poland, so these selections of Spain and Italy will play their encounter in Gdansk. 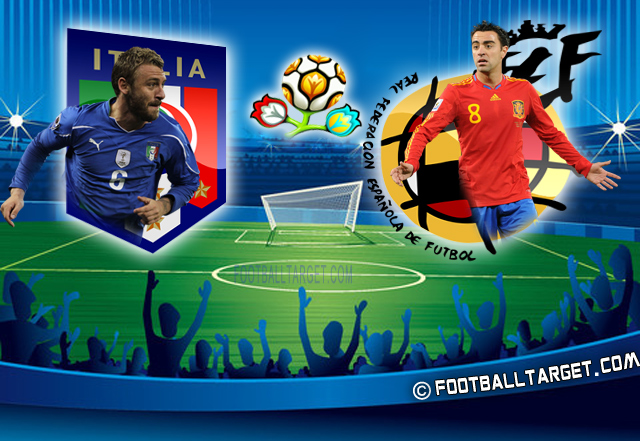 Otherwise, the current European and world champions at this competition are valid for one of the main favorites, and this is certainly confirmed by three wins in their last friendlies before Euro,while the Italians are in a totally different situation, because they suffered two defeats in the last 10-odd days, and have big problems with the match-fixing scandal.

These two selections ,less than a year ago weighed theirs strength in a friendly match, and then Italy has celebrated at home with a 2-1, while the Spaniards before that were much more successful, and certainly their most cherished victory was at last the European championship, when they passed in the quarter-finals after the penalty shoot-out.

That was actually Spanish toughest match in the entire championship, so we can freely say that it is precisely after that match began their ascent to the throne of Europe and the World.

However, this selection, led from the bench by an experienced expert V.del Bosque certainly deserved both these titles, because they simply outperforming all their opponents, and how much Spaniards,are really hungry for success this year, is best illustrated by their performance in the last qualifying, where they achieve all eight wins .

However, after this period they a bit relaxed and in a few friendly games acted quite indolent, which used the English who beat them, while in Costa Rica they just drew.

Then del Bosque had urgently make serious his stars to avoid even bigger problems, which apparently yielded results, as the first in February this year with even 5:0 fall Venezuela, while in the latter term for friendly matches, respectively have fallen and selections of Serbia, South Korea and China.

But here we must point out that Spaniards did not at all look so convincing as before, which is perhaps the result of fatigue and exhaustion from a exhausting season, but also miss of a David Villa, which together with Puyol and defender Iraola due to injury will be missed at this European Championship.

This means that for the central striker position will fight Llorente and Torres, while is very interesting that just before the departure to the European Championship from the final list fell off this season great Valencia´s striker,Soldado.

Anyway, and this time Spanish game will for sure be based on the complete control of the ball and the relentless passing in midfield, where the main levers are Xavi and Iniesta, while the most problems could be in theirs last line where Ramos and Pique in general does not look so convincing.

As for the Italian national team, already we said that currently their main problem is how to distance themselves from the latest match-fixing scandal, especially since in part of an investigation are called the Buffon, Maggio, Bonucci and Criscito to conversation.

This last one, was eventually dropped from the list of passengers for the European championship, while the remaining three will still get a chance, but remains a big question how this all,will leave a mark on their performances.

However, experienced Buffon will certainly continue to be the first choice of coach Prandelli, as in most of the qualifications, which they otherwise routinely done with eight wins and two draws, while up to November last year Italians were excellent and in the friendly matches.

But then came the first defeat from Uruguay, and the same thing happened at the end of last month, when they lost by United States with 1:0, and even from Russia with 3:0.

The very same last match showed all the weakness of Italians, and according to many estimates their performance at this championship should be quite modest, and some even predict that they will not even pass this group stage, where after Spain, awaits them a very unpleasant Croatian and Irish selection.

However, coach Prandelli has announced an entirely different approach of Italians than we have all already used, which means that Italy will be extremely offensive, which is also the reason Prandelli called six attackers. Otherwise, a few days ago from the Italian list fall of and injured defender Barzagli, and instead him was called Cagliari´s defender Astori.