Unlike the first two quarter-final matches, where teams from Group B were indicated as an absolute favorites, this Saturday and Sunday their force will weigh four big European teams, which many even before the Euro 2012 expected in this knockout stage.This Friday is scheduled match between Spaniards and French football players. 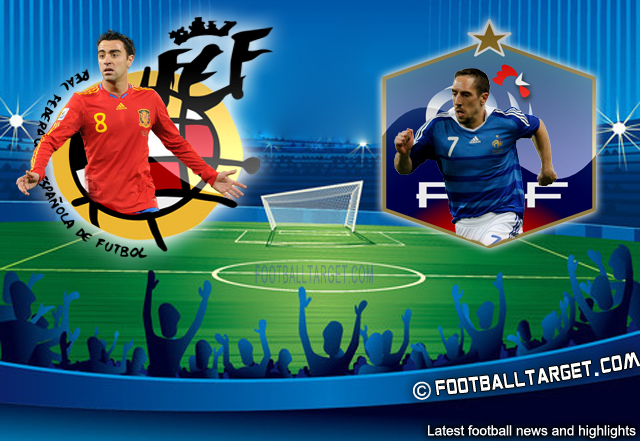 Otherwise, these two selections in recent history played three times, and the first time it was six years ago at the World Cup in Germany, when France celebrated in the eighth finals with a 3-1, while 2008th and 2010. year, Spain was better in friendly matches, which were played in Malaga and Paris

Of course these two triumphs of Spaniards were expected, considering that it was in those years that Spaniard have won the European and World Championship,and their confidence was at the highest level possible, just like at the beginning of this year’s Euro, on which they come after winning the maximum points in qualifying.

However, in the first round they stumbled upon a big resistance from the Italians and played only 1:1 (Spain 1-1 Italy Highlights,Preview), and certainly all still remember Spanish tactical formation for this match without any real attacker, which was certainly the reason for their somewhat modest offensive display.

Certainly that saw and coach Del Bosque,who perhaps tried to copy style of Barcelona,but it wasnt so successful so already in the forthcoming match with the Irish from the beginning was given the opportunity to Torres, which he used the best, and scored two goals, while the one added Silva and Fabregas.(Spain 4-0 Ireland)

And when all expected that in the last round with the Croatians they routinely come to another three points, the Spanish footballers again show a faint game, any was very close for them to get knock-out from the Croats, but referee Stark was on their side that day,and Spaniards “luckily” reach the semi-finals.(Spain 1-0 Croatia)

However, primarily due to defenses of Casillas, and obvious referee errors on two occasions, they have managed to maintain their goal clean, while in the finishing of the match they used slightly more open game from their opponents and over fast footed Navas they reach a minimum victory.

Of course in an unpleasant encounter with the French they need a much beeter game,above all in the attack part, because it is quite clear that most teams have a real answer to their endlessly passing in the midfield, but Del Bosque still believe that with this type of game and with the same 11 players can outsmart “Tricolors” and finally achieve equity in the semifinals.

Just like the Spanish, and French after the first two rounds of group phases have the same number of points. First against the English in a hard played game they drew 1-1 ( France 1-1 England), while in a meeting with the one of the hosts, Ukraine they were much more specific in the attack and celebrated with a 2 : 0 victory (France 2-0 Ukraine).

But then in the third round apparently disparaging they entered the match with already “fallen” Sweden, where persistent Scandinavians on the wings of a brilliant Ibrahimovic surprised France and scored them twice.(France 0-2 Sweden).

On the other hand, the French themselves harder a job, because in the Group D table,England has crossed them, so the French in the quarter will play against the European and world champions, which is definitely the toughest task at the moment.

However, coach Blanc still believes that his talented selection, led by great attackers Benzema and Ribery can properly compete with the Spaniards. At the last press conference Blanc,pointed out that the defeat of the Swedes might even arrive in the good time for his players to finally realize that they are not invincible,after 23 games undefeated.

Also, some players on an indolent approach eliminated themselves from the first lineup, so again places in the first lineup will have Evra, Cabaye and Menez. Also it is expected to come up to certain shifts in the field, considering that tge French in this match will likely to play in something more defensive fortmation.

Prediction : The current European and world champions have not exactly thrilled at the group stage, except for encounters with weak Ireland, but this time, however we expect that talented French selections is quite sufficient motive to do their best, and when that happens then their is a small number of teams which can seriously confront the powerful Spain.Spain to progress further.

Watch match Spain vs France from ours live stream section