Spain has won the European championship which was played in Ukraine/Poland.The Spaniards with goals of David Silva,Jordi Alba,Fernando Torres and Juan Mata have defeated Italy and for the third time in a row won the title at the biggest football competitions. 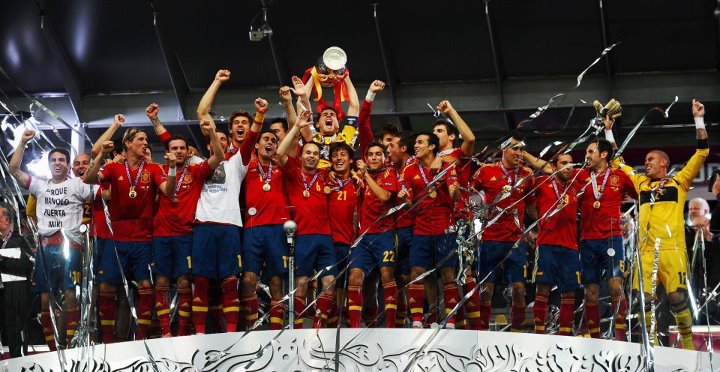 Along with this triumph,Spain and Spain footballers have set several new astonishing records and also they have achieved some amazing stats,while the Italians joined them in the history.

2.Spain set the record with the highest win ever in the history of European championship final matches (4-0).

3.Spain national football team has became the first European winner with only one conceded goal throughout the tournament. Scorer to Spain were exactly the Italians in the first round match of the C-group, which ended 1-1.

5.Iker Casillas on Sunday became the first footballer in the world with one hundred victories in the national jersey. The record was previously held by the Egyptian Ahmed Hassan and the Frenchman Lilian Thuram (94 per victory).

6.Spanish also tied a record of the keeper Edwin van der Sar with nine games without conceding a goal in the finals of European Championships.

7.In his 137th matches for the Spanish national team, Casillas broke the record of the Italian goalkeeper Dino Zoff in the number of minutes without conceding a goal at the European championships.

Zoff has keeped a clean sheet for 494 minutes, while Casillas at the European Championship in Poland and Ukraine kept his net intact for 511 minutes .

8.Fernando Torres with three goals, and considering the one in the final match with Italy , is officially named for the best scorer of Euro 2012.Also,he is the first player who managed to score at two European competition final matches in a row.

9.David Silva in the 14th minute has scored with his head for the Spaniards 1-0 lead. It was the 22nd goal scored with head on this European Championship. Never at some tournament have fallen so much goals with heads like at this one.

10.Antonio Cassano has been replaced in all 15 last appearances for the Italian national team.

11.Mario Balotelli during the final 90 minutes has not received any ball within the Spanish penalty box.

12. All 12 goals at the tournament Spaniards have scored inside the penalty area.

13.Spain has equaled the German record and now have three titles like the germans

14.Spain continued its incredible strike without conceding a goal in the knockout stages of major competitions. The last goal which they conceded was a goal of Zinedine Zidane in the round of eight at World Cup 2006. in Germany.