The last match of the Premier league’s 17th round brings the clash between the 12th-placed Stoke City and the leading team Chelsea FC, who currently have 20 points more. Last season this two teams have met three times, twice in Premier league when both teams celebrated home wins, while in the FA Cup Chelsea celebrated at Stamford Bridge with 1-0. 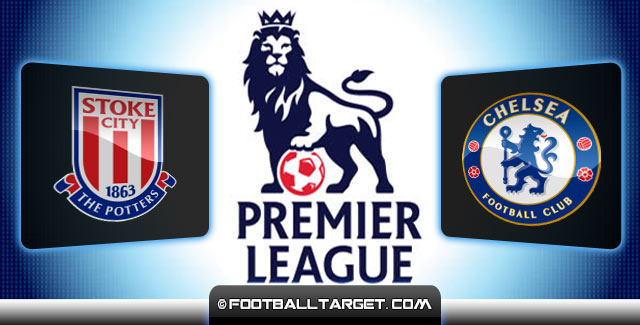 Stoke City is a solid team that is not easy to defeat, but the Potters had no luck this season in a lot of games, while Chelsea only thinking about winning as Manchester City have the same number of points as Chelsea FC.

Stoke in the last two rounds have won four points and the Potters recovered from a few rather unfortunate defeats, but 13th place is not what satisfies Stoke coach Mark Hughes, and by the quality of the playing staff Stoke should be on the above places.

The real test of how much can really Stoke do, will be tonight when Hughes’s men will host the leading team Chelsea. The Potters will try to repeat the last season success when they finally defeated the Blues. It was their first win over Chelsea in the last 12 games. In a dramatic match Oussama Assaidi in injury time scored for the final 3:2.

– We start dense holiday Schedule, which is for all clubs is a big challenge, but despite some problems with injuries, I think that we have a wide enough bench to be competitive with every team – said Stoke manager Mark Hughes, who in his playing career enrolled 123 appearances for Chelsea and scored 39 goals, won the FA Cup, League Cup and the Cup Winners’ Cup.

– For me this is a special match, but also for all the players because we will play against the leading team of the league and we know how good are they.

But we also have our strong points and we will not fear to enter into this clash – promised Hughes who still can not count on the absent striker Odemwingie and midfielders duo Moses and Sidwell . “It is a bit early in the week but Bojan has trained for the past two days, which is a positive for us,” the former Chelsea striker explained on Thursday. “Hopefully he will be fine. We certainly don’t envisage there being any real problems with him ahead of the game.”

Chelsea FC after their first defeat this season ( vs Newcastle) bounced back with wins over Hull City and Derby County in the Capital One Cup, but the Blues coach, Jose Mourinho is aware of threat which Stoke City poses.

“They are a good and difficult side.

“They have that important base that Tony Pulis gave them: physicality, set-pieces, aggressive, direct. This was the base of their success since they came to the Premier League. In the last couple of years with Mark Hughes, without losing that identity, he has brought some of his own ideas, some players that can have more than that physicality.

– Last year, we deservedly lost because at Britannia Stadium because we made two big mistakes with two conceded goals, but the referee was good and did not allow a rough play. We expect the same now, to protect all players from excessive aggressiveness, and our plan is to play nice football and to show our identity in pursuit of victory.