In the last match of the Premier league 7th round which is scheduled for this Saturday, the last placed team Sunderland after firing their coach Di Canio and appointing a new one, Kevin Ball, welcomes the current Premier league champion, Manchester United. Neither side is doing well, and both of them are desperate to win some points. The champions, David Moyes´s team is currently on the 12th place, which Red fans are not use to it. The last round , home match against WBA who celebrated at the Old Trafford certainly did not help to Moyes and there are more and more critics pointed to him.

Regarding the Champions league, it can’t be said they are doing bad, since they celebrated against Bayer Leverkusen at home with 4-2 and drew in Ukraine against Shakhtar Donetsk. What can be noticed is that Moyes team plays variably.

Defender Ferdinand and midfielder Fletcher are injured and out for this match, while opposed to the match with Shakhtar, Rooney this time, should be in the starting lineup.

Kevin Ball´s debut match in the Premier league wasnt so good, as Liverpool beaten them at their Stadium of Light with 3-1. Situation with injured players wont help , as they have a lot of problems with it, where Dossena (thigh, 19 Oct), Fletcher (shoulder, Nov), Brown (calf, unknown), Bardsley are out, while stopper Diakite and striker Borini are doubtful. 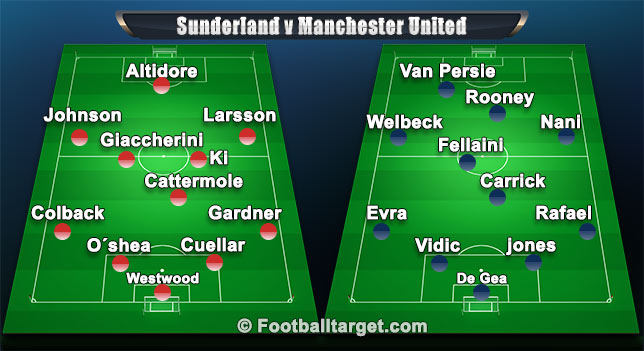