And this season we have a chance to enjoy in the matches of great rivals in one the biggest European football clubs derby, in popular “El Clasico”, at least four times this season.

As a warm up, Barcelona and Real Madrid will play two Super Cup matches, and this is the first one, which will be played on the ground of the current King Cup winners, Barcelona, while the current La Liga champion so got a chance to win a trophy in front of home crowd in the rematch.

Super Cup is not so much appreciated competition, but when these two rivals are playing, then every match is very important.

Last season they met eight times and it all started exactly in the matches of the Super Cup. Barcelona had more success and won the trophy, also they have defeated Real Madrid four time, with three draws, but only one victory of Real Madrid was enough for them to hit the sky or,to won the Spanish Primera league which of course is much more important and has the highest value.

Barcelona enters the new season with a desire to return the trophies which they “lost” the last season, but for the beginning, one of them they must defend.

They won the Super Cup last season with a draw in Madrid and a victory at the Nou Camp against Real Madrid and this time they want to repeat the same.

Spanish league they opened on the way on which they have wining titles for years, by playing great football at Nou Camp,where visiting team,Real Sociedad had no chance and so,Barca trash them with high 5-1 ( Match Highlights, Full match video).

On the bench is a new coach Tito Vilanova, but they played as Pep Guardiola was still there , so we can already concluded that Barca will continue with the same style of play, which means countless short passing, or tiki-taka.

At the opening of the season they scored five goals and even the early goal which they have conceded seemed like nothing for them. This summer they brough two great players, Jordi Alba from Valencia, and a few days ago Alex Song from Arsenal.

Alba played in the first round,while Alex Song had not yet debuted and maybe it just happens in this game. Otherwise, Messi scored two goals right away, and the great news is that a goal scorer was a returnee after a serious injury, striker David Villa. Out of action for this match are Cuenca and Abidal.

Real Madrid defends only one trophy this season, but perhaps the most valuable one, intended to winner of the Spanish Primera League. They did not exactly on the best way started defending of that tile, because in the first round playing at home they drew with Valencia. True, the opponent by no means was some easy, but Real Madrid was a host and playing in front of his fans everyone expected a lot more.

They were dominated on the pitch, had an early lead, but from the only serious situation in front of their goal, Valencia scored and the entire second half wasnt enough for them to win this match.

Bad start, which cant encourage then ahead of the game in which they do not have quite as imperative,according to their boss Mourinho,perhaps knowing that it would be a tough game for them, although,certainly it would be nice recapture the trophy from their biggest rivals.

Real Madrid this summer,still hasnt bought any player,but big drama is still active with their target Luka Modric or maybe Walcott who is mentioned as reinforcements as well.

For this match they are traveling with the old proven lineup, where may not be a defender Pepe who suffered an awkward kick in the first round against Valencia.

If the Portuguese would not be ready, surely Raul Albiol will replace him. Jose Mourinho a bit surprised with the lineups against Valencia, in which Fabio Coentrao was on the left flank, while for this match we expect Marcelo on that position. Khedira and Benzema have also been on the bench, although his replacement Higuain scored the only goal for the home team. 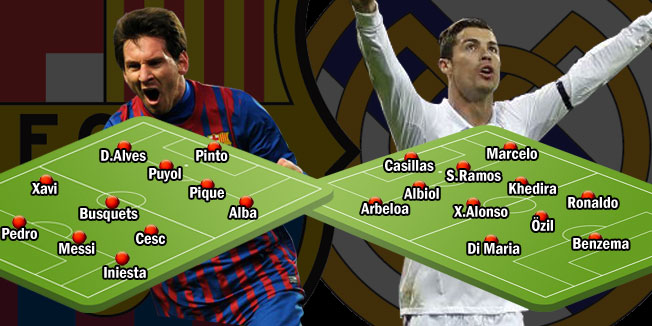 Prediction : Differently they have started the new season, but it is certain that on this match will have more influence what has happened in the last season. Barca wants revenge and will do anything to win. Given that the rematch is playing in Madrid, is likely that Barca will succeed and win this.Barcelona to win.If you want more challenges you can play Messi to score,and over 2,5 goals.