Italian season 2011/2012 ended,unbeaten Juventus took the Serie A league title, after a close fight with AC Milan who ended with 80 points,while Juventus in the ended won four points more (84).

With the title the club returned to the top and turned a shameful page in its history, after he was dropped to the 2nd division and have their last two league titles disenfranchised due to a match fixing scandal. 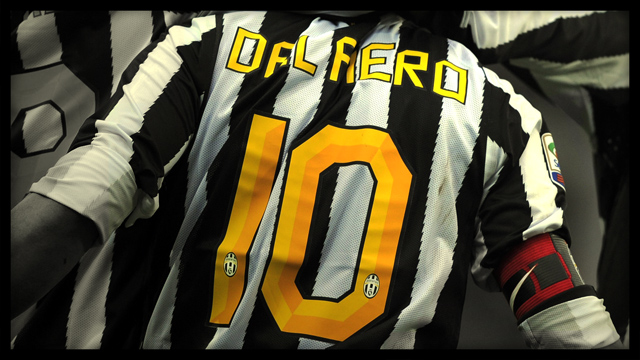 But if on one hand that title brought joy,than is undeniable that another fact has awakened grief and memories, the news that striker Alessandro Del Piero will no longer wear the jersey number 10 in Turin saddened many.

Story about a legend

At age of 37 the Italian forward will not have the contract renewed, despite the protests of the fans, the president Andrea Agnelli, heir of the Fiat group, which owns Juventus, upheld the decision.

The Italian player has played for 19 years at the club,and during this period became an idol and a symbol of the team, in which Del Piero is considered by many, for the best player in the history of the Turin club.

Del Piero started his career in Padova where he played only 14 games before moving to Juventus in 1993.

Earlier Del Piero was gradually entering the team, playing alongside the famous trio formed by Baggio, Vialli and Ravanelli.Soon Del Piero became the main protagonist and player of the club.

The Italian playmaker and forward scored 289 goals for Juventus em714 games, by which he secured the title of a leading scorer in the club history, and won major titles for the club like a Champions League and World Club Championship as well as eight national championships (two of them were canceled).

Del Piero has achieved many personal achievements of great importance, as the top scorer of the Champions League in the 1997-1998 season with 11 goals and in Italian Serie A 2007-2008 with 21 goals.

In addition to titles with Juventus, Del Piero won individual awards as the best player of the Italian championships in 1998 and 2008, among many others.

For Italy, Ale, as it is called, also made a history, playing 91 matches where he scored 27 goals.

Ale,played in the World Cups 98, 2002 and became a world champion 2006 by scoring a goal of paramount importance in the semifinal against Germany.

Del Piero has played on four European Championships (96, 2000, 2004, 2008) and is therefore in a small group of players who competed in four tournaments for European teams.

Del Piero on the European Championship competition 2000. reached the final , where Italy lost the title to France.

The player over all these years, has become a symbol character of Italian football and idolized as a king by Juventus fans.

But now he must leave the club to whom he devoted more than half of his life, a fact which angered many because somehow the current direction is not the way on what a King should be treated.

Unfortunately the reality is this, the number 10 shirt is vacant, and the club will now have to find a new owner of number 10, which will not be easy, as well as a great player outside the pitch,where Del Piero was an example to other players, a lead.

But Del Piero will not retire, he indicated it will seek new challenges in his victorious career, and the club who manage to secure his services will for no doubt have a player in his squad still formidable, despite his 37 years.

Del Piero remained alongside Lionel Messi and Andriy Shevchenko, as the only players in the top 10 of the greatest scorers of UEFA who are still active.

Player has also made it clear that he will not play for another Italian club, which once again shows his gratitude to the club that gave him everything.

Now comes an end of a era where Ale will retire, leaving the legend, but Del Piero will be forever in the memory of the fans and football fans.

Meanwhile, Juventus, in turn, will have to learn to live without his perhaps the greatest idol and player ever!

“Being a symbol of the club means a lot to me. It means being responsible and giving a positive message, and off the field. “DelPiero

“The affection that the fans showed me every day is incredible. So, what happens happens”
Del Piero resigned to his departure from Juventus, but aware of its importance in the club.

1. September 19, 1993: Juventus 4-0 Reggina
In this game Alessandro Del Piero scored his 1st goal in the shirt of Juventus, a week after his debut for the team, then as 18 years old player.

2. December 4, 1994: Juventus 3-2 Fiorentina
Playing alongside Ravanelli and Vialli, Del Piero scored in this match one of his finest goals.
Juventus were losing 2-0, but managed to draw with goals of Vialli, and Del Piero.With this goal he won the Bianconeri fans by scoring a spectacular goal.

3. May 22, 1996: Juventus (4) 1- 1 (2) Ajax
Del Piero scored his 1st goal in the Champions League against Borussia Dortmund.
In the final game against Ajax player did not score, but had a great performance where he won his first and last cup of the most important club tournament on the planet.

4. April 24, 1998: Juventus 1-0 Inter Milan
Match which has marked the meeting of the two candidates for the Italian title 98´ season, Juventus and Inter Milan, separated by only 2 points.

Del Piero scored the winning goal in a tough game.
With this victory the Turin club claimed the title of the best Italian club by wining the Serie A title.

5. November 8, 1998: Juventus 1-1 Udinese
This match marked a critical moment in the career of Del Piero
In the final minutes of the game the player had a rupture of the knee ligaments that kept him out of the lawns for a long time.
In the course of the season without their top player Juventus ended up doing a poor campaign.

6. May 14, 2003:Juventus 3-1 Real Madrid
Juventus run on the field with the disadvantage of having lost the first semifinal leg by 2 x 1 by Real Madrid with Zinedine Zidane.

However,Juventus did not surrender,and they shown great performance.Carried with Del Piero and Nedved Bianconeri won by 3 x 1 and reach the final against Milan,where they lost on penalties.

7. July 4, 2006: Italia 2-0 Germany
Semifinal World Cup 2006.
In an amazing game Italy beated Germany with a great goal by Del Piero
With this victory,Italy place themselves in the final,and in the end they won the world championships.

8. September 16, 2006: Juventus 2-1 Vicenza
In 2006, Juventus were demoted to the 2nd division due to match fixing scandal,where Del Piero after 13 years returned to Serie B, as with his first club, Padova, he played in the second division.

In this game, the second of the season, Captain Del Piero celebrated 500 games as a pro and scored his 1st goal of the 20 that would make throughout the season, finishing as top scorer.

With his contribute,Juventus rises once again in the Italian top league.Once again,this time in Serie A,Del Piero scorer the most goal in the league,and won the title of the Serie A first scorer.

9.Juventus won the first match against Real Madrid with 2-1,and on the away match Del Piero scored second goal for a 2-0 lead.On the way out in the end of the match Del Piero received a standing ovation by the Bernabeu fans.

10.  30.October 2010: Milan 1-2 Juventus
This season Del Piero has been playing less,but in this match, which was extremely important, Del Piero scored for the victory over the Rossoneri club and reached the number of 179 goals.

11. The last season
With the arrival of Antonio Conte, his former club colleague, Del Piero spent lots of time on the bench,but Ale accepted this condition, and continued in a dignified manner always giving his best.

On January 24, Del Piero write another history, because this day against Roma he scored a goal at Juventus new stadium, thus becoming the only player in history who scored over the four stadiums of Juventus: Comunale ,Delli Alpi Stadium Olimpico and Juventus.

Early in April 11, in the game against the Lazio Del Piero scored a winning goal at the end of the match and once again have showed allof his quality.Already against Atalanta player scored his last goal wearing number 10.

In the history few clubs had the opportunity to see their best players retiring wearing in the club´s shirt, even more rarer was to see their idol end his career at the club.

Juventus had this opportunity, but so ungrateful, let her pass, and now undoubtedly creates a malaise, not only with their fans, but for all football lovers.

And finally, what can I say?
Thanks Alessandro Del Piero, you are undoubtedly a legend!