Another meeting, which should bring an interesting game is a duel of Serie A competition between domestic team Udinese and visiting team Internazionale who returns to battle for the third position.Udinese missed their chance to reach third place in Serie A after they were defeated from Roma with the 3-1 result and certainly another defeat could mean the end of their hopes for a place that leades in the Champions League. 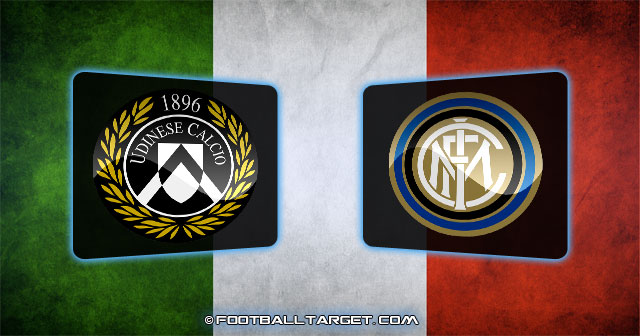 Udinese went very sharply during the season, but a large number of injuries that have befallen the team has just brought this team in a very unprepared situation for this finals matches of the season.

The team of coach Francesco Guidolin is at this very moment struggling to find their true form which would allow planning ambitions they have for the third position. Therefore a series of only one win in five meetings led this team to fourth place with 51 points, with what Lazio currently fled them with 3 points ,so if they don’t capture the victory in this duel they are threatened to fall from the current location , so I’m sure the players will do everything to give the most of themselves in this match .

But this is easier said than done and all because of the large number of injuries encountered by the team Udinese so in this duel are out due the injureis Dusan Basta, Mauricio Isla, Mehdi Benatia, Antonio Floro Flores, Diego Fabbrini and Emmanuel Agyemang-Badu while Giampiero Pinza is suspended and the large number of absences is clearly felt in the games so Udinese coach Francesco could start this game with a possible 3-5-1-1 formation with Handanovic, Coda, Daniel, Domizzi, Pereyra, Fernandes, Pazienza, Asamoah, Armer, Abdi and Di Natale inside the first lineup.

This is certainly without a doubt one of the worst league season, which has a Internazionale team in the recent history of this club, where Neroazzurri are just show disappointment to all competitions in which they find themselves.

The last change on the bench and coming ambitious coach Andrea Stramaccioni seem to have a certain effect on the players, after they managed to take the same seven points from the last three meetings, so the team from the Giuseppe Meazza again found itself in the race for a place which leads to the Champions league next season.

Inter currently is six points away from third placed team Lazio and how they are meeting with them the last day of competition ,Inter certainly going to do everything what they can to play that match with a chances of reachin Champoons league, so this Saturday after recent results they will play against Udinese wiht a big dose of confidence where they will go to enter all three points.

Maicon and Wesley Sneijder are still players who will not play due to injury while Walter Samuel is suspended but the good news for this Inter is that the playmaker Ricky Alvarez returned to top form after recovering from injury so for this duel we could expect formation
4-3-3, with Cesar, Zanetti, Lucio, Chivu, Nagatomo, Cambiasso, Stankovic, Obi, Alvarez, Milito and Zarate inside.

Good news for the Udinese is that they retain fourth position despite winning only one game in the last eight league, but as the Napoli, Roma and Inter Milan are immediately behind them with only 1-2 points difference, Udinese is in a very difficult position ,which he can with eventual victory in today’s duel greatly improve.

Regarding to this meeting, Emmanuel Agyemang-Badu, Maurizio Domizzi and Giampiero Pinza are returning to the lineup while Gelson Fernandez is supsended and Mauricio Isla and Damiano Feronetti are out due the injuires.

Inter Milan is still undefeated under the leadership of coach Andrea Stramaccioni and under his leadership they show a great improvement in the game and their character, but Neroazzurri still are five points away from the place that leads to a European competition.
After the victory at home against teams Siena where they celebrated with a 2-1 score, Inter players shown a solid game on the away match against Fiorentina, but they could not convert their domination into the lead so the match ended with a tie 0-0 without goals.

One point taken from this duel left the Inter team two points behind place for the European Champions and a total of six points behind the Champions League places, so match against Udinese for them is a must win match.

Guests are empowered in this duel with of return very important midfielder Wesley Sneijder who is expected to play at the Friuli stadium, but Cristian Chivu and Javier Zanetti are under the sign of the questionmark while Walter Samuel and Luc Cataignos are beyond posibilite to play.

In this Serie A derby in any case we can expect any outcome, given that both teams needed points in the battle for European positions, but we believe that Inter and this time will continue his attacking approach, while Udinese at home already playing a lot more open than on the side.Both teams to score or over 2,5 goals.