For the first time in the history of the Champions League in the knockout stage, there will not be the current champion, Chelsea, but that does not mean that we will not see some great matches. On the contrary.

Already in the second round a draw was ruthless and so Barcelona will play with Milan. Barcelona throughout history has a better score. Of 13 matches they won six times, Milan has won three times while four matches ended without a winner.

Cristiano Ronaldo returns to Manchester. But this time on the other side will be Sir Alex Ferguson and his ‘devils’. In the History of European competitions Real Madrid in three of the four matches with Manchester United emerged victorious, and their coach Mourinho certainly knows how to play against Ferguson’s team. Jose Mourinho in 14 games against Sir Alex has six wins and draws and only two defeats. 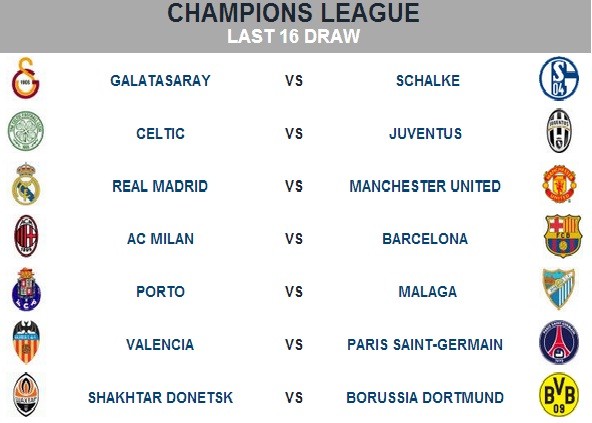 The Bavarians Bayern Munchen will play against Arsene Wenger´s Arsenal.In the four previous mutual meetings Bavarians have won twice,once drew and once have lost. Borussia and Shakhtar played only twice and both times the German team celebrated.

Juventus, it seems, should have the easiest job, as he will play with Celtic. No favorites in matches between Galatasaray and Schalke, Porto and Malaga or PSG and Valencia.
First matches are scheduled for the 12th February next year, and the second ones three weeks later. Group winners will play away the first matches.

In Nyon after the Champions league draw,was held and the Europa league draw.