The second match of Spanish semifinal of the European leagues do not offer the uncertainty what was expected when we found out that these two teams will meet. In the first game Atletico Madrid pretty unexpected came to the advantages of the two goal difference, making them favourite here,despite the fact that they have received two goals at home. 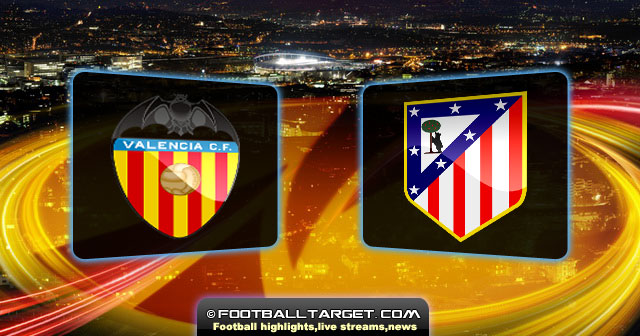 Valencia may even be happier with those 4:2 (Atletico Madrid 4-2 Valencia Highlights), because the second goal they gave in the compensation time and exactly that goal gives them hope in front of this match, and for Atletico does not allow even one moment of relaxation. Atletico Madrid since 2003. had not won at the Mestalla, but generally they recorded results which would in this case guarantee them the finals. This season they lost in the league with 1:0, and before that they drew three times.

In very difficult situations Valencia players brought themselves and for placement in the finals they will certainly need a great play and great game. They definitely provide that great game, especially at its Mestalla, but it for that to happen it needs to coincide many things. For example, they would not have anything against if happen again a game which they played in the Sunday against Betis. Then they took a lead in a very early stage of the game, scored the second goal in the mid second half, then the guests were left with one less player, so the “Bats” in the finish scored two more goals for the final 4-0 (Valencia 4-0 Real Betis Highlights).

They do not need that much against Atletico, but they certainly should need a good defensive play which they demonstrating against Betis, but not in Madrid, where they received some very “cheap” goals. Against Betis from the team dropped defender Victor Ruiz and Ricardo Costa has played, because Barragan returned to the right side and such defensive formation we should expect against Atletico. Mathieu and Tino Costa paused because the cards, but now they will play for sure, while for the attack from which is expected a lot here, will take the lead scorer of the team Soldado.

And Atletico had made a good prelude for a rematch of the European League semi-finals, because on Sunday at home they beat Espanyol 3-1 (Highlights ) and stayed in the race and maybe even the Champions League. Roughly something like this was expected after winning away at Rayo Vallecano, and the great victory over Valencia in the first game which gave them wings. Much like with Valencia, the attack was the one who corrected errors of defense.

Again they received a goal and that after an early lead which brought defensive player Godin, but in the second half, Arda Turan in just two minutes, scored two goals and resolve all match doubts. Falcao has not scored, which is a rarity really,and in the ranks of Atletico they hope that he kept himself for Mestalla. As regards to the composition, he looked exactly the same which should be sent on the pitch against Valencia, and it means something less offensive with Adriano on the bench, and Salvio from the first minute on the field. Falcao is, of course an irreplaceable like Diego, and Arda Turan is showing great form, so in this part is all clear.

Miranda was rested and he will return for this match, and Alvaro Dominguez will be on the bench. There is still a dilemma in defensive midfield, because Gabi was replaced at halftime on Sunday, with Mario Suarez. The most dangerous for Atletico Madrid would be if they already started thinking about the road to Bucharest, where the final game will be played.

Prediction : Valencia plays very variable, but also much better at home. In Madrid they played poorly, but even so, they scored two goals to offer them a chance. They will definitely score at home, and if they can improve defensive play, they should win here.