West Ham United have completed the signing of the 28-year-old attacking midfielder and Ligue 1 “King of assists” from Marseille. 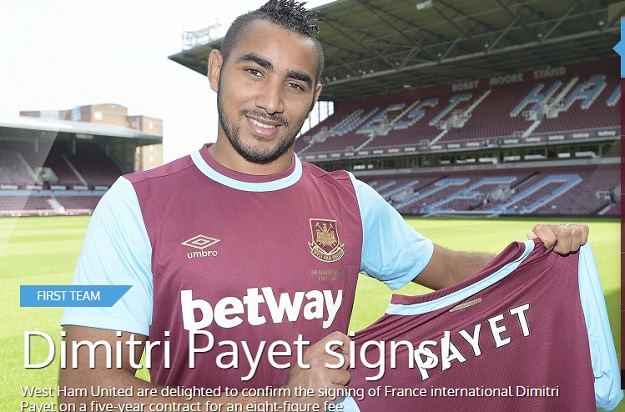 After signing Sampdoria midfielder Pedro Obiang Hammers on a five-year contract, with a further one-year option, for an undisclosed eight-figure fee from French Ligue 1 side Olympique de Marseille have brought Dimitri Payet. Although the official fee wasn’t announced it’s believed that a fee is £10-11m.

Payet, 28, has 15 caps for France and the most key-passes in the top European leagues, 134, while last season in Ligue 1 Payet has set 17 goals to his teammates.

“West Ham really showed me that they wanted me to come, both the joint-chairmen [David Gold and David Sullivan] and the manager,” Payet told the club’s website.

“That’s very important for me. I was also keen to sign up to a clear project. West Ham’s is very interesting and matches perfectly with my ambitions.

“Firstly I spoke with the manager, who really wished for me to come here and had been watching me a lot. He made it clear that he wanted me to sign and that was important in my choice.

“I’m an attacking footballer and that they’re counting on me to help achieve that gives me a sense of responsibility. It’s true that it’s taken a little while but that’s normal – negotiations are like that. But now that it’s done, I’m very happy.