One of rare match in the 35th round of English Premier League, in which both teams are “interested” to get some points. Specifically, on Saturday afternoon at DW Stadium 17-placed Wigan, which is only one point separates from the relegation zone,host fourth places Newcastle, who after six consecutive wins suddenly found himself in a position to play next season in the Champions League.

Otherwise, in the last six duels, these two teams have the both two wins and two draws, but we must point out that the “magpie” from its Newcastle achieved their two victories in their last two meetings.. 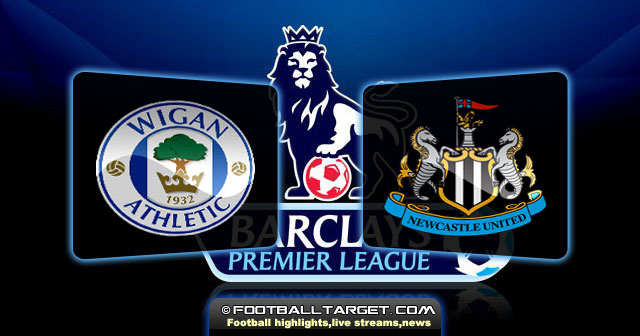 Thus, in the autumn this year, Wigan players at Newcastle were defeated, but we must also point out that in general they were not in a inferior position, and now they hope that with in the right front of his fans can still get favorable results. Even more so if we know that the last two home matches, against Stoke and Manchester United’s resolve in its favor, so they certainly have great confidence before this Saturday’s extremely important match for them.

The chosen ones of coach Martinez, apart from those two victories, even managed to celebrate on the away game against Arsenal, with which in fact after a long time they made an escape from the relegation zone, but after visiting  defeat at Fulham in the last round they again complicated their situation , since now they have only one point more than 18th placed Bolton and three more than the Blackburn. However, we have already said they are now returning to their DW Stadium, where they expected to confront intensified “magpie”, but they probably not bothering too much with the wonderful results of their opponents, but they would just like against United and Arsenal’s attempt to impose their own rhythm and thus reach the necessary points.

This means that the coach Martinez again should sent something more offensive tactic even with three players in the attacks, among which there should be recovered  Maloney. On the other hand, still out due the injuries are defender Stam, midfielder Jones and striker Rodallega.

As we mentioned in the introduction Newcastle players stand behind a great series of six consecutive wins, so they are currently unrivaled team with the best form in the Premiership. It is no wonder too that they have already reached the fourth place at the table, which is usually the last to lead in the Champions League, so it is expected that in the remaining three rounds, and in a postponed match with Chelsea they will try to win as many points and thus to achieve great success in placing to the most prestigious European clubs competition.

Of course it is quite feasible, especially if they continue with such great parties in the defense, which in the last six matches stumble just once, while on the other hand, their strikers, led by rookie Papis Cisse `relentlessly shaking the net. Specifically, this great Senegalese in all these matches score goals, and gave them a total of nine, while next to him we must point out the Frenchman Ben Arfa, who provided superb games as a team playmaker.

As for the rest of the team, it is quite logical that the coach Pardew does not make too many changes, because results are very much in his favor, and so against Wigan, we can expect the same eleven as in the last match with Stoke. Otherwise, outside of the team are injured defender Taylor, midfielder Marveaux and striker Lovenkrands.

Prediction : Of course this series of six consecutive wins infuse great awe of Wigan players, but we must also know that these points are indispensable to Wigan in the struggle for survival, so we expect that as in previous home games to give their best, especially in the attacking part, which means that this time should be plenty of goals at DW stadium.So,over 2,5 goals.