The 2014 World Cup draw which will be played in Brazil next summer has been completed, and group play will begin June 12. The host and multiply World Cup winners, Brazil at their Arena de Sao Paulo will open it against Croatia, meaning for the first time the European nation has been involved in the opening game. As usual, the top two teams from each group will advance to the knockout stages.

Draw of the World Cup in Costa do Sauipeu began with a minute of silence in honor of the deceased Nelson Mandela , and the ceremony was attended by the legendary Pele and Brazilian President Rousseff Dilma .

World champion Spain got the group B and the opponents Chile, Australia and the Netherlands, while in Group C they are Colombia, Greece, Ivory Coast and Japan. In the strongest group or the popular ” Group of Death ” they are Uruguay, Costa Rica, England and Italy.

In Group E will play Switzerland, Ecuador, Honduras and France, while in a very tough group G they are Germany, Portugal, Ghana and the United States. It seems the easiest Group is Group H in which are Belgium, Algeria, Russia and South Korea.

The rookies at WC , Bosnia and Herzegovina are placed in the Group F with Lionel Messi’s Argentina, Iran and Nigeria.

The host, Brazil on June 12 will open the World Cup 2014 against the European team, Croatia, while in the same Group they are Mexico and Cameroon.

GROUPS FOR THE WORLD CUP 2013 IN BRAZIL 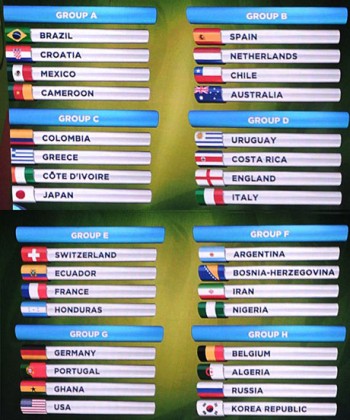