According to media reports, after bringing Neymar to Barcelona during the summer transfer window Barca will look for reinforcements in defense, and their first target will be two players of Chelsea FC, David Luiz (26) and Branislav Ivanovic (29) … 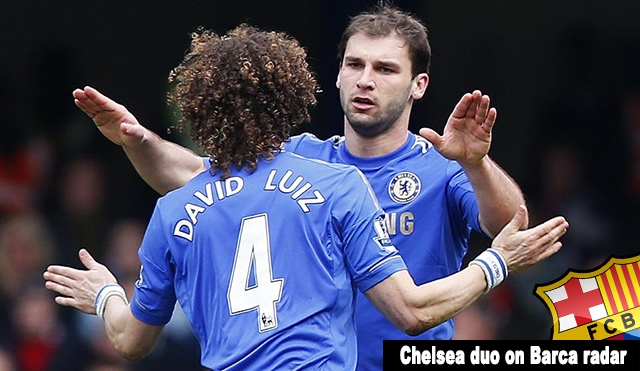 Spain Marca says about the interest in the Brazilian center-back Luiz, who arrived at Chelsea 2010th from Benfica with a compensation of 25 million euros and signed up for the 2017. year.

It stated that the club from London club would not agreed to release him under 40 million, so that Barça should collect at least part of that money from the sale of Victor Valdes and David Villa.

Daily Star writes about the interest of the Catalan giant for Branislav Ivanovic, who arrived at Stamford Bridge 2008th year from Lokomotiv Moscow with a compensation of 13 million euros. Ivanovic´s value according to Transfermarkt.de market is estimated at 24 million euros.Daily Star also claims that Chelsea are ready to sell this defensive duo to Barca for a combined £40million,Luiz (30) and Ivanovic (10) as the new coach Jose Mourinho has already found replacement for Luiz in Porto defender Eliaquim Mangala.