A chartered plane carrying 81 people, including a top Brazilian football team, Chapecoense FC has crashed overnight near the city of Medellin in Colombia. According to the latest news, at least six are believed to have survived.

PLANE which way flying to Colombia was transporting 81 people (72 passengers and 9 crew members) has tragically crashed on the eve of the landing near the city of Medellin in Colombia, AFP reports. In the plane that crashed were and members of the Brazilian football team Chapecoense, who traveled to the South American Cup final against Atletico Nacional Medellin, a few days after playing against Palmeiras.

My heart breaks for the staff and families of Chapecoense FC after the crash that claimed most of their team. Sending strength & love. pic.twitter.com/qiIcyrp7lk

– Regional police chief Jose Gerardo Acevedo gave the final figures on casualties. “We pulled six survivors from the plane, but one of those persons died in hospital. The other passengers and crew members died in the crash. A total of 76 dead and five survivors.

According to the reports, the plane lost contact with ground controllers as it approached Medellin at about 22:15 (03:45 GMT), after the pilot reported an electrical fault. It came down in a mountainous area.

Brazilian team Chapecoense is dubbed as European Leicester City FC following their quick football success, coming from the Brazilian league C (4th league) to the Copa Sudamericana final first leg in just six years. Placement to the strongest South American competition was the biggest success of the club. Chapecoense reached the final stage five days ago with a goalless draw against San Lorenzo, having previously played in Argentina 1:1. 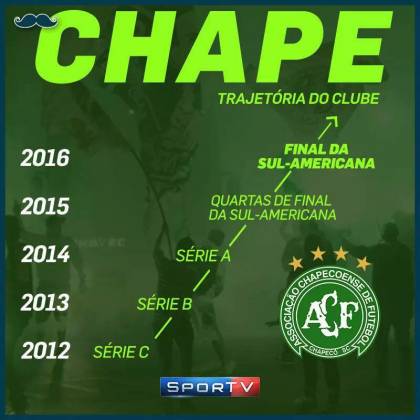 “This is our most important journey in history,” said the coach Caio Charolais before going to the first meeting of the finals, not knowing that this will be the last trip for him and his incredible team that will forever be remembered, such as the Czech hockey team in 1948, Turin 1949 and Manchester United in 1958.

Names of the players who were on the flight:

A sad day for football communities, the fans and before all their families.

Chapecoense vice-president Ivan Tozzo told SporTV. “We could never have imagined something like this. Chapecoense is the biggest reason for joy here.”

Football communities all over the world united in paying their farewells and support to the players, families and the club.

Sad news to wake up to today. Thoughts are with @ChapecoenseReal and their family and friends.

My thoughts are with all members of @ChapecoenseReal and all their families! #PrayForChapecoense 🇧🇷🙏🏻 pic.twitter.com/9CEjyQwqLs

“The whole town is crying. We would never have thought that this could happen. FC Chapecoense always have been a joy to our people,” said Tozzi.

The game which Chapecoense FC supposed to play against Atletico Nacional Medellin is of course postponed until further notice and as CONMEBOL reported, all others in South America as well.

“The South American Football Confederation confirms that it has been notified by Colombian authorities that the plane on which the Atletico Chapecoense of Brazil delegation suffered an accident on its arrival to Colombia. We’re in contact with the authorities and we are awaiting for official updates,” it told the press. “The CONMEBOL family enormously laments what has happened.

“All activities of the confederation will remain suspended until further notice.

“President Alejandro Dominguez is currently in transit to Medellin.”

“This is a very, very sad day for football.

“We are so sorry to hear about the airplane crash in Colombia, it is shocking and tragic news. At this difficult time our thoughts are with the victims, their families and friends.

“FIFA would like to extend its most heartfelt condolences to the fans of Chapecoense, the football community and media organisations concerned in Brazil.”

As we stated before, the final was delayed, but most likely it will not be played at all because the Colombians have shown that they are a big club and have asked CONMEBOL to award the Copa Sudamericana title to Chapecoense.

Chapecoense's opponents, Atlético Nacional, want the title to be awarded to the Brazilian side. https://t.co/rcFZZhehed

With tears, in our eyes we at Footballtarget.com would like to send our prayers to the players, their families, the club, and the fans.

#ForçaChape They are on their way to the heaven! #ForçaChape