The last meeting of the 34th round of English Premier League is playing at London’s Emirates Stadium, and between the teams that have very different ambitions in the finish of this season.

The home team,Arsenal is currently in third place and safely is moving towards securing the third spot which means direct placement in the Champions League, while guests from Wigan, despite the great victory over Manchester United in the previous round continue to fears for their survival, because there are only one place above the relegation zone , and with two points more than Bolton and three more then Blackburn. 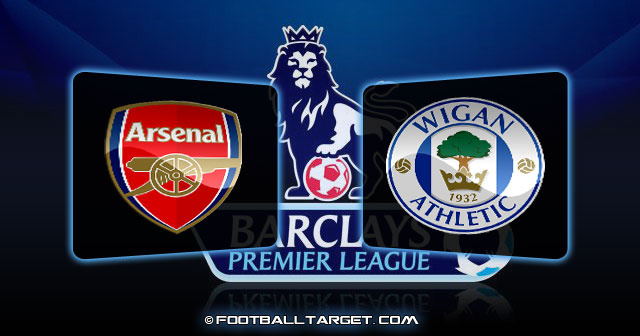 Otherwise, in the first part of the season Arsenal celebrated with the high win in Wigan 4-0, while last year at home was better with the 3:0 ( Highlights ), but in the previous two matches , their opponents showed their teeth and in two home games won four points

Of course this should be a great warning to chosen ones of coach Wenger, regardless to the the stats that on their stadium they have 10 straight victories over Wigan, and it is common knowledge that teams which are fighting for the survival are playing to all or nothing, and it can even lead to very strange results. One such was certainly in the last round when Wigan won over current champion Manchester United, while before that on away match at Chelsea also showed a great game, and only due to lack of happiness in the end they were defeated with 2:1.

But on the other hand, Arsenal also enters this match quite relieved, as they have five points more above the fourth Spurs, which is really a big difference considering to the situation before last five rounds. For this, certainly it contributed most theirs recent two victories at home against Manchester City and then as the guests against already written off Wolves, and what perhaps Wenger can pleased the most is the fact that in these two matches they manage to keep the clean sheet.

However, against a maximum “brawling” and motivated Wigan certainly expects team a completely different game, where they need to be a ready for rally in an open game in which the attackers would be in the lead role.

But they certainly have the great advantage in the figure of first league scorer van Persie and fast winger Walcott , while Benayoun and Ramsey recently provide much more better games. Otherwise, in this meeting will be missed because of injury Midfielders Wilshere and Diaby , defender Mertesacker, while his colleague from the last lines Koscielny is suspended due a red card.

We have already said that the Wigan team in the last round made ​​a real feat, when they at home beated the Manchester United 1-0 ( Highlights ) which was also their third win in the last four rounds.

Thus, with these nine points coach Martinez chosen ones after a long time escaped from the relegation zone, and certainly will in the duel with Arsenal also, try with a brave play to get at least one point.With this recent good form certanly their confidence boost and they will try with cool heads to enter into the match with the “Gunners”, who is known as a team that likes to outplay their opponents, which for the guests is very convenient, because in this situation they will certainly have plenty of space for their quick counter attacks, in which they are real masters.

First of all, here we think on their pace striker Moses Maloney, while in the attack they have great Argentine Di Santo, who used his chance great after Rodallega injury. Otherwise, apart from this Colombians, from the match at Emirates will also missed due the injuris midfielder Jones, and defender Stam.

Prediction : As we mentioned in our analysis here we can expect a completely open game, mostly because no team likes to defend, while the guests in addition received a huge confidence after the triumph over United, and certainly they will not at all be scared by the atmosphere at Emirates.Over 2,5 goals.