According to the English press, Arsene Wenger has received an information that Chelsea have won the race for Diego Costa, which means that Arsenal turned to the second choice – Mario Mandzukic. 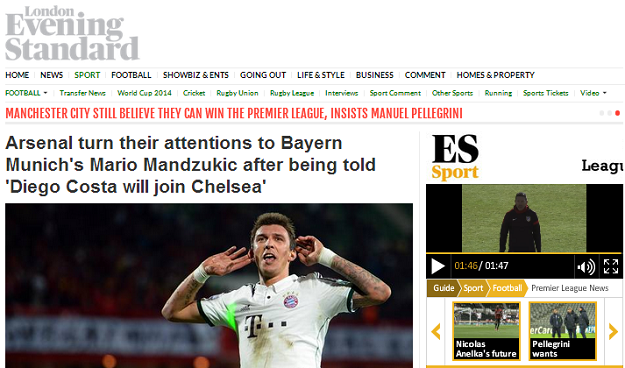 Although the club sporting director Matthias Sammer, recently stated that Mandzukic definitely remains at Bayern, Evening Standard claims that it’s not true because Guardiola wants two bring three signings for next season, and the Bavarians money for the reinforcements could get by selling Mandzukic and Toni Kroos.

“I always said that I like the Mario plays. On the ground he is like a beast. It is amazing how much Mario runs and makes for ​​the team, ” said Sammer for Sky90.

For Mandzukic are reportedly interested in Juventus, Real Madrid, Arsenal, Chelsea, for which Sammer has a message:

“You should not even bother to try to sign him!”

Besides Mandzukic, Wenger bitten for Solomon Kalou and Loic Remy and reportedly would gladly brought and Alvaro Morata from Real Madrid.