In the Champions league semi-finals first leg match between Barcelona FC and Atletico Madrid both teams due to injuries have lost a very important players ahead of re-match in Madrid next week. 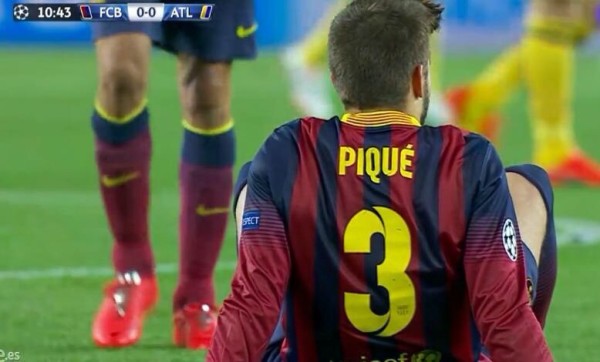 Spanish international, Piwue, has left the game in the 11th minutes after the air duel with Diego Costa after which he fell awkwardly on his back . According to preliminary data, Pique damaged his pelvis and will be out for at least a month .

At the same time , the famous El Mundo Deportivo says that he picked a rupture of a hook because of which Barca defender could be absent from the pitch and up to four months . In this variant , the Spanish national team could be without his services and the world championship in Brazil this summer .

That one bad news doesnt come alone, confirms and injury of Atletico Madrid key player, Diego Costa. Even he wasnt 100% fit to play in the first leg match, Simeone decided to go with him in the first lineup. The 25-year-old Costa has left the pitch at Camp Nou in 30th minute of the first half with a pain in the back of the lodge. This morning (Wednesday) he went to make a few tests, after which he disappointedly commented:

” I can not play next Wednesday unfortunately and help my players .”