Second quarter-final match is scheduled for this Friday,and bring us the match between one of the Euro 2012 surprises,Euro 2004 title winner Greece and Germany.

Germany is the absolute favorite in this match and from that fact Germans can not escape, while the Greeks apparently like to play such a games. 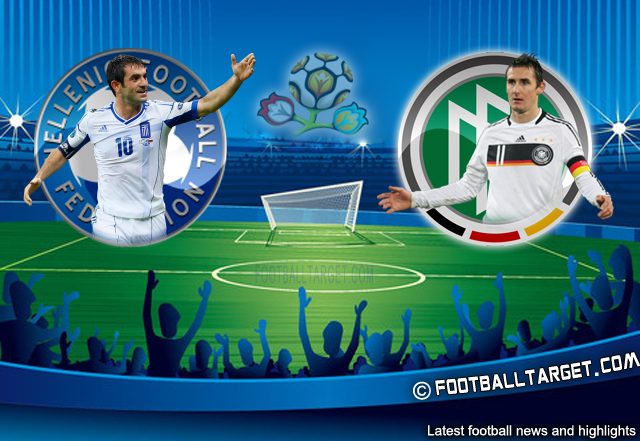 Germans the role of the Championships favorites proved in the group with three wins, although all were minimal .They won matches,but they werent so convincing like on they road to Euro 2012.

Greece in the group behaved exactly as expected and they won passage on their unique way. They were written off before the championship, after the first round, even more after the second round but then they won against first group favorites, Russia, and here they are in the quarterfinals.

Eight times these two teams have played so far and Greece had never won, while three times was a draw. For a long time they have not met, and their last two matches in qualifying for World Cup 2002, Germans smoothly resolved in their favor.

When you arrive at big competition as the favorite to win the title or be at least among one of them, then of course a lot of is to expected from such team.
Some do not endure the pressure and experience a complete collapse, but the Germans do not fall into this group. The role of the favorites they justified with the fact,they were the only team at this championship which in the group stage recorded all three wins.

The score was not so persuasive, but the group was the strongest possible. One can say that in general they have not played something special, which again confirms the quality of this selection.

They play an average and the most important,they win. If Germans decided to schedule their form, then the rights Germany has yet to play and there would be no surprise that this happen already in this quarterfinal match with Greece.

Against Portugal, it was an average display with a lot of luck,and against objectively the strongest opponents ,the Netherlands ,Germans have played the best so far, while against Denmark just as much as needed.

Against Denmark’s, Low was forced to change Boateng due to card sunspension which was the only change, and it was a big hit.

Dilemma was also with Lahm or Howedes on right side position, but Low introduce there Lars Bender, who was the first name of the match and a decisive goal scorer.

Already this is sufficient indication of the Germans strenght.For this match, Boateng is set to return so Bender probably will be again on the bench. In the offensive part there should not be any changes, at least not at the start lineup.

The story of the “cat with nine lives” is the story of Greece in this championship, but it is fair to say not only on this.Irresistibly all reminiscent of the “EURO 2004” when they were complete outsiders, but in the end,raise the trophy.

There are also some differences, since then, in the group they won at the start and lost their last match,against Russia, which they defeated now and so reached the quarterfinals.

No one should underestimate the Greeks, especially after shown in the group stage.In the first match against Polish when they were damaged by the referee, they still managed to win a point and were closer team to victory.

Against the Czech Republic they disappointed, and because of it,against the Russians no one gave them some big chances. Only victory was their good option and in this case they would not dependent on other match results.

They played their game,and the coach Santos made a series of changes in the composition. Estimated threw out Fortounis and Fotakis , and as expected defender Sokratis and striker Gekas have reutrned in the team, but the surprise was Tzavellas on the left side instead Holebas.

The Russians dominated, but Greece scored suddenly when the Russians were already thinking about the break between the two halves.When they took the lead, it was clear that the Greeks are becoming very uncomfortable and the Russians have gone home.

Team captain Karagounis led his team and he scored a winning goal,and thus redeemed himself for the missed penalty in the first round match with Poland.

Finally the pair of defenders were Sokratis and K.Papadopoulos and with them it was clear how much safer the defense looks like.Both of them are playing in the German Bundesliga,so they know German players very well.

However, in front the quarterfinals the Greeks are heavily handicapped, because Karagounis received his second yellow card and has no right to participate in this match. Karagounis is practically irreplaceable,so now coach Santos have large concerns and dilemmas.

There are two options,defensively Makos or something more offensive Ninis , which is more likely.Holebas entered the game and also got a second yellow card, but on the left side already started Tzavellas, so here everything is clear. The rest of the team will be the same.

Prediction : It is very clear who is the absolute favorite in this match. Greeks are not team against you can play relaxed. Germany is aware of it,they are not Russians, and certainly they will not underestimate an opponent, and therefore we believe that defensive Greeks approach will not pass here ,and the match will be the open one with lot of goal.Over 2,5 goals.Of course it is good to play on Germans to win here.

Watch match Germany vs Greece from ours live stream section.