ROBERT LEWANDOWSKI, Borussia Dortmund striker arrived in Munich today for a medical examination and he signed a five-year contract with the European champion, Bayern Munich. 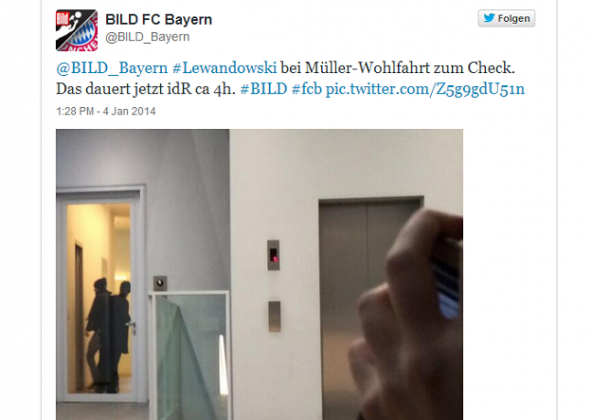 Lewandowski who was very close to Bayern last summer, but deal was not closed, as Dortmund vetoed a move to the Allianz Arena,knowing that they would ultimately lose him for nothing as he will be a free player, now despite some interests from Manchester United, Arsenal and Real Madrid has put a pen on the paper with Bayern and signed a five-year contract. According to Bild, The 25-year-old Poland international forward will earn € 5 million per season.

By the end of the season the 25-year-old Lewandowski will remain in Borussia for which since 2010 he has scored 65 goals, including a hat-trick against Bayern Munich in the final of the German Cup back in 2010, and four goals against Real Madrid in last year’s semi-finals of the Champions League.

The next summer, Lewandowski will join another ex Dortmund player, Mario Gotze who left Dortmund for Bayern ahead of the 2013-14 season, after the German champion has payed €37 million buy-out clause. From the magical trio, only Reus, for now is staying at Dortmund.

“We are very pleased that we managed to complete this transfer,” he told reporters. “Lewandowski is one of the world’s best strikers. He is going to strengthen our team, he will give us another boost.”