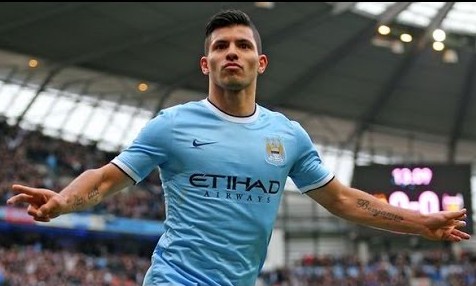 Argentine assassin Sergio Aguero returned to form with a bang as he scored five goals in an awesome 20 minute spell to extinguish Newcastle’s hopes at the Etihad.

Newcastle had taken the lead on 18 minutes with a header from Serbian striker Aleksandar Mitrovic, who scored his first goal in English football after joining from Anderlecht in the summer for a fee reported to be £13 million.

It remained 1-0 to the visitors until the 42nd minute, when City finally managed to beat Tim Krul. David Silva cut in off the right hand side of the penalty area, and clipped a delightful ball to the back post to Fernandinho, who unselfishly nodded the ball across the ball across the six yard box for Aguero to stoop and head home. It ended an uncharacteristic barren spell for Aguero, who had gone 424 minutes without a Premier League goal, while he had gone 595 minutes without a goal from open play in all competitions.

After that the floodgates opened, and it took the little Argentine only four minutes of the second half to give City the lead. He picked the ball up from his partner in crime Silva, cut in on his left foot and fired a shot that deflected past the unfortunate Krul.

Two minutes later he was at it again, and it was the finish of a player with confidence flowing through his veins. This time it was Belgian midfielder Kevin de Bruyne who slipped him in, and Aguero did the rest, delicately lifting the ball with one flick of his right boot over the onrushing keeper to seal his hat-trick.

City added the fourth three minutes later, and this time there was a new name on the scoresheet. Jesus Navas crossed from the right, and found de Bruyne in space inside the area. The Belgian sliced his volley, but it looped into the net via the underside of the crossbar.

Aguero was not to be out of the spotlight for long however, and after receiving the ball from Silva on the left hand side, squared up the defender at the edge of the area, before creating half a yard to whip the ball right footed into the far corner. 5-1 to City.

There was to be no respite yet for the beleaguered Newcastle defence just yet, and two minutes later City’s impressive trio were at it again. David Silva slipped in de Bruyne inside the area, who played the ball across the six yard box first time, where Aguero slid in at the back post to tap the ball home for his fifth. It rounded off a blistering 20 minute spell either side of half time for City’s number 10, where he touched the ball on 10 occasions, but found the back of the net five times. He now has 6 goals in the Premier League this season, the same number as the entire Newcastle squad.

He was taken off shortly after, and looked disappointed not to have the opportunity to be the first player to score 6 goals in a Premier League game.

His manager Manuel Pellegrini later revealed that Aguero had received treatment at half time and that he understood the decision to substitute him. City will have bigger fish to fry and will need a fit Aguero firing on all cylinders if they are to challenge for silverware this season.