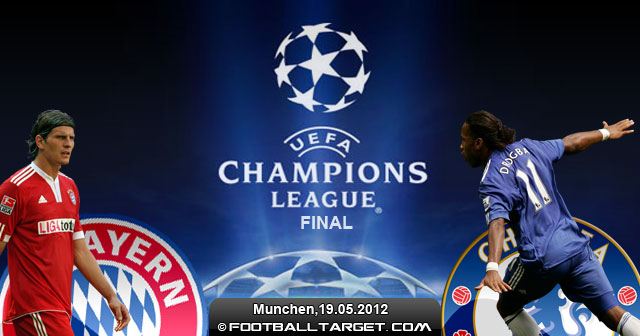 In Munich, on Saturday will be shared the prestigious trophy precious 62 centimeters and 7.5 kilograms for which at the Allianz Arena will fight Chelsea and Bayern Munich. That is how much the trophy tends which all football teams want to raise with pride. ‘Blues’ for the first time in its hundred year history, and the Bavarians first time after 2001. year.

To trophy in the last two months were closer Bavarians, but only because of tradition that the famous ‘bucket’ two months before the final resides in the host city so that everyone could see.

In Munich’s the prestigious trophy arrived from Barcelona, winner of last edition most elite European club football competition. Catalans celebrated at Wembley by defeating Manchester United in the repetition of the final two years earlier.

These finals have been played in Rome, where were also convincingly celebrated the Catalans. It was the fourth time that Barcelona took the throne of Europe, the second time in three years and the second time against the ‘red devils’. With the new title Catalans have made Spain the country with the most titles won in the Champions League.

Bavarian team has much more experience in the Champions League final. They have last played and lost against Mourinho´s Internazionale 2010th year at the Santiago Bernabeu.

The Italians won 2-0 with goals from Diego Milito, while to the Bavarians could not help even Ivica Olic. Croatian striker that season was the second scorer of the Champions League with Cristiano Ronaldo with seven goals. The best scorer was Leo Messi, who scored just one goal more

The Champions League final in 2007/08 season for Chelsea was fatal Manchester untied. Then the ‘Blues’ in a dramatic finale lost after penalty kicks and after the failure of Captain Terry.

Chelsea will have an opportunity for the first time in its 107 years long history to win European title against Bayern at their Allianz Arena.

The last time before Inter Milan, the Italian team celebrated the 2007th , when the angry city rivals of ‘Nerazzurri’ AC Milan in the repetition of 2005. final with amazing goals of Inzaghi managed to break Liverpool and paid back to them for the defeat three years earlier.

For the past five years in the finals twice celebrated Spanish and Italian teams, while only one trophy picked team from the England.

Chelsea could continue the series while the Bavarians with celebration on its stadium could restore Germany clubs on the map of most elite football tournament. Interestingly, the last seven finals played teams from England or Germany.

This time in the finals will play with each other, the Germans against the English, in the collision of two completely different football schools which trough the history are ruthlessly ‘beating’. This will be a final showdown, at least in clubs football …

Its interesting,on their way to the Champions league final,both teams played with German/English clubs already,and both of them on the first stage the group one.Namely,Bayern Munich played with Manchester City where he won the home match and lost the away one with the same result 2-0.

While Chelsea played against Bayer Leverkusen and won the home match 2-1,while the away one lost with 2-1.