Chelsea head into their home game against West Brom in second place, but find themselves 5 points behind leaders Arsenal after slipping up last weekend, losing 2-0 away at Newcastle. It’s vital for Chelsea that they keep the gap between leaders Arsenal as small as possible, so a win against a West Brom side is a must. Chelsea’s last home game against City will be remembered for Mourinho’s celebration after Torres capitalized on a Hart and Nastasic mix up to give them all 3 points in the last minutes of the game. It’s unlikely that Chelsea will need another late winner here though, however I wouldn’t rule it out in what has so far been one of the most unpredictable premier league seasons to date.

Mourinho made six changes to the side that lost against Newcastle in their midweek game against Schalke. A brace from Eto and a rare goal for Demba Ba ensured that Chelsea bounced back immediately.  West Brom on the other hand travel to Stamford Bridge on the back of a 2-0 win against Crystal Palace, the baggies first win since toppling United at Old Trafford in September.  Unfortunately for West Brom, the stats would suggest the game is already lost, not having won at Stamford Bridge for 30 years. In that period they have lost 11 of their 12 games away to Chelsea, only achieving one draw. It’s not a great record, but no one expected West Brom to beat United earlier on. Anything can happen in the Premier League, so chose your soccer bet on this match wisely.

Mourinho on Hazard situation and Torres injury
Jose Mourinho looks ahead to Chelsea against West Brom on Saturday and discusses Eden Hazard and Fernando Torres.

Eden Hazard returns to the Chelsea squad after disciplinary action was taken when there was a mix-up with his passport when Chelsea faced Schalke.  Fernando Torres however misses out due to a thigh injury which is likely to rule him out for a few more weeks.  Therefore Samuel Eto’o or Demba Ba will start up to, with Eto’o likely being the chosen one thanks to his fine performance in the Champions League. 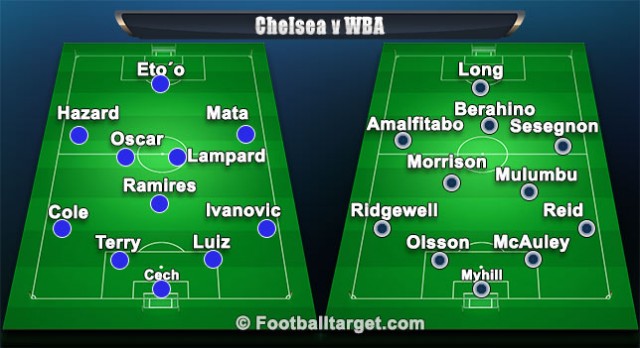