Arsenal travel to Old Trafford top of the table and 5 points clear, a position David Moyes could only dream about finding himself in. Despite finding themselves in 8th position however, a win for United could see them enter the top four if results go their way. There will be more pressure on United to get a result than for Arsenal, for whom a defeat would still leave them at least 2 points clear at the top. Wenger’s side has some breathing space, something Moyes is yet to experience.

Arsenal I feel will fancy themselves to go to Old Trafford and grab a result after what has been a fantastic start to the season for the gunners. However Arsenal will want some revenge for that 8-2 defeat they suffered two seasons ago at Old Trafford, but if there is ever a good time to take your revenge, then surely this is it.

However despite United’s rather slow start to the season, there are signs of improvement. They are unbeaten in their last 8 games in all competitions and have won their last two premier league games. Rooney and Van Persie are also on fire, with 16 goals between them this season. Worringly for Arsenal, this is a fixture in which Rooney seems to thrive in. He has 12 league and cup goals against the Gunners which include a hat-trick in that 8-2 win back in 2011.

The two teams had very different experiences in the Champions League this week.  Manchester United played out a sluggish 0-0 draw against Real Sociedad in Spain, while Arsenal took the trip to Borussia Dortmund, Champions League finalists last season, and came away with a win. Arsenal will head into the game high in confidence believing they can head back to the capital with all 3 points.  8 points separate these two sides, a win for Arsena would surely all but end United’s title hopes, leaving them 11 points adrift.

Manchester United could find themselves without Jonny Evans, Rafael and Tom Cleverley who were all injured last weekend. However Robin Van Persie is expected to make a return to the starting 11 to face his former club after started the game in midweek on the bench.

Arsenal are still without Theo Walcott, Yaya Sanogo, Alex Oxlade-Chamberlain, Lukas Podolski and Abou Diaby who are all sidelines by injury. Flamini is hopeful to make a return after suffering a groin injury in the win at Crystal Palace, with Jack Wilshere having his ankle injury assessed. 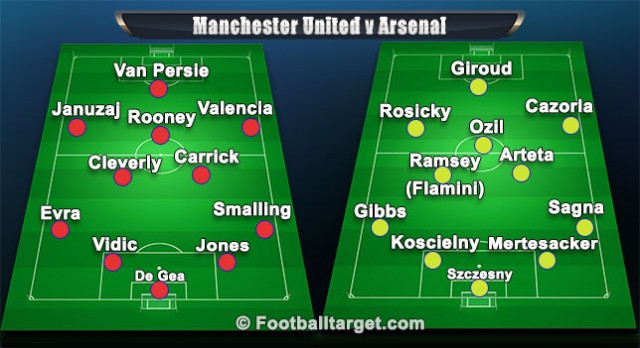