Diego Costa looks set to miss crucial game against Manchester City on Saturday after being charged for a stamp against Liverpool in the Capital one cup semi-final. 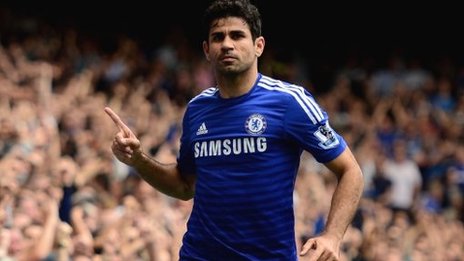 Chelsea hit man came head to head with Emre Can and Martin Skrtel after stamping, and avoiding a red card from the referee. The FA has charged the former Atletico Madrid striker for stamping Emre Can and not the incident with Martin Skrtel.

Referee Michael Oliver and the 3rd official did not punish Costa and Jose refused to admit the act was intentional.
An FA statement read: ‘The charge is in relation to an incident involving the Chelsea forward and Liverpool’s Emre Can which occurred in the 12th minute of the Capital One Cup semi-final second leg at Stamford Bridge last night [Tuesday 27 January 2015].

‘The player has until 6pm on Thursday 29 January 2015 to respond to the charge.
‘Following a review of an incident during the game involving Costa and Liverpool’s Martin Skrtel, The FA will not be taking any further action.’

The FA will issue suspension once Costa responds to his charge and it may well be beneficial for Manuel Pellegrini’s men on Saturday. Manchester City can take advantage from Costa’s suspension and reduce the point gap to just 2 points in the Barclays Premier League table.