You are here
Home › international › Preview : Netherlands vs Germany Friendly

Match between two big teams who recently meet often, but as far as for this match, in both countries there are a lot of those who are against this strong match at a time when the players are already pretty tired of playing for their clubs.

It is known that both teams have top players which are playing in top clubs, which also have wanted that their stars get some rest.

Because of that, in both teams, there are a large number of absences for various reasons. Both countries are the leaders in their qualification groups for World Cup 2014 in Brazil, but the Germans made one blunder and that was in the last round at home, while the Netherlands is at maximum performance.

The last two matches between these two teams Germany have won. At the European Championships this year was 2:1, while in the friendly match exactly a year ago in Hamburg was 3:0. However,this match will be played in Amsterdam. 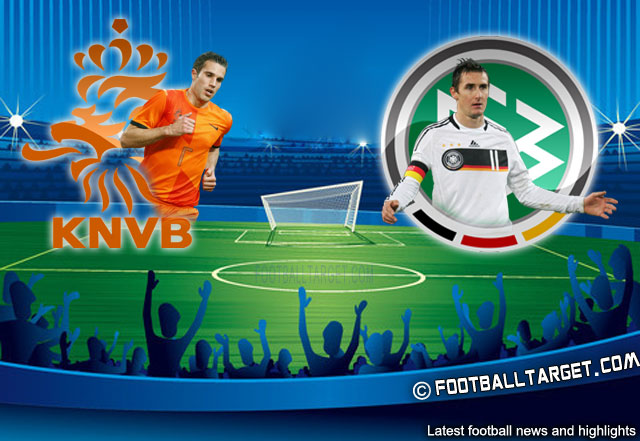 It is likely that The Dutch in this match will have a bigger motive, because they have lost twice by the Germans in a year, and besides there are playing at home in front of their fans.

Of course, when these two selections are playing the motive is always present because of the rivalry, regardless of whether it is a friendly match or not.

The Dutch have utterly failed at the European Championship, after which they got a new coach van Gaal, who in his debuted in Brussels has suffered a defeat in a friendly match, but then the team have entered in one positive run of form and currently they are leading in their qualifying group.

Four very secure victories the Dutch have achieved in a way that in the front of their fans they are scoring less goals, but without conceding ones, while as the guests they concede one,but on the other side they are scoring an average of four goals with lot of different goal scorers.

In this game, the Dutch will miss a number of players, and the biggest handicap will be in their attack,where this match will skip Robin van Persie, Narsingh and their first scorer of qualifications so far.

Besides them, goalkeeper Stekelenburg and midfielder Strootmana will also miss this game. Nevertheless, the initial lineup will still show that the team of Netherlands and without all these players is very strong and powerful.

Germany has made an inconceivable blunder in the last qualifying round against Sweden when they had a 4-0 lead, and the match finished 4-4.

Probably even today it is not clear to them how they allowed this to happen, so their confidence is not on the biggest level, and the match against the Netherlands in which the Dutch will seek for revenge,is the one they would like to avoid.

In Amsterdam they travels with much more problems in team,than their opponents have.Selector Low compared to the match against Sweden can not count on the six starters from that game, while the total number of absences is even higher.

In the last line will miss a duo from Bayern Munich,Boateng and Badstuber, midfielders Schweinsteiger,Kroos and Ozil, while due to injury will miss and their striker Mario Gomez,but except him,Cacau and Miroslav Klose will miss this game to.

It will be a very unusual lineup of the Germans, but again with a number of top players.

Match Prediction : Even when they play a lot more important matches than this one, they are very interesting and very often with a lot of goals. Given that this is a friendly match in which the selectors will try a various number of players and tactics , we belive the option over 2,5 goals is the best one here to take.

Watch Netherlands vs Germany online from our live streams section