Another major: Spanish-Italian Match after the yesterday´s one between AC Milan and Barcelona, in the 3rd round of the Champions League, but before all, another mega duel between two big teams and multiple champions of Europe.

These two teams have played and the Champions League final and then the Spaniards were more successful, but of the nine mutual matches in this competition, Juventus has one more victory (4 Real wins, 5 Juventus wins), and it is interesting that it was never a draw.

The last time Real Madrid CF vs Juventus played was in 2008th and then Juventus won both games in the group stage. Real Madrid have better opened this season’s Champions League, while La Liga not so good. Last weekend in domestic competitions, Real won, and Juve’s enrolled a first defeat this season. It was against Fiorentina, where Bianconeri even have had a 2-0 lead,but manage to lose with 4-2.

The Los Blancos in their last 13 home Champions League matches are unbeaten (11 wins, 2 draws). The first star of the team , the Portuguese Cristiano Ronaldo is currently the top scorer this season after netting five goals in two games, while Angel Di Maria has more assists than any other player so far (3).

Playing at the Santiago Bernabeu, Real Madrid is very impressive. Since April 2011 and the match against Barcelona , Real Madrid have scored at least a goal in each of their last 27 Champions League matches. Currently they scored 10 goals which puts The Los Blancos at the top. It is interesting that most of these goals, eight, they scored in the second half.

No major injuries, while Xabi Alonso is doubtful for this match.

After a 4-2 defeat from Fiorentina, Juventus manager, Antonio Conte, insist they don’t fear Real Madrid , and that the Bianconeri can respond quickly.

“Something unthinkable happened in Florence, but in football these things can happen,” the former Italy international told reporters on Tuesday.

“We lost a game that we dominated for 70 minutes. We were home and dry and had more than one opportunity to score the third goal,” the former Italy international said after the defeat.

“I don’t think our focus was already on Real Madrid, otherwise we would have got our overall approach wrong.”

“But this game against Madrid gives us great excitement and motivation. We are playing against one of the most decorated sides in the world.

“It will a tough game, but I’m sure that we will give our all. We must be willing to suffer. It will take great attention on our part, from a technical and tactical point of view.

“We respect them, but we certainly don’t fear them.”

Defender Stephan Lichtsteiner (thigh) and midfielder Simone Pepe (thigh), strikers Mirko Vucinic and Fabio Quagliarella (both thigh) are ruled out for this match due to injuries. 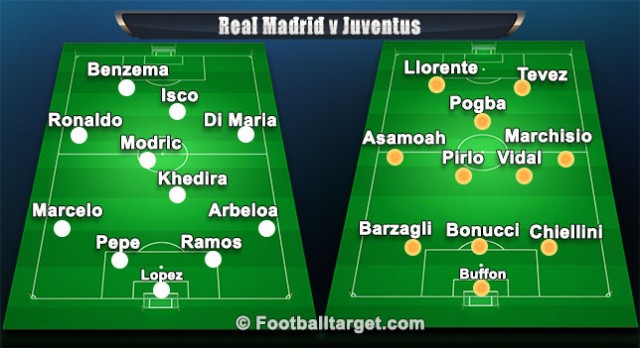 Match Prediction : Surely the home team is the big favourite here, so the first option would be Real Madrid to win. However, considering Juventus needs some points, they could at least score a one goal. So the second bet would be over 2,5 goals. The best odds for this are at Bet365 and you get a 100% bonus.