On Saturday from 20:45 eyes of the entire sports world will be at the San Siro, where Real and Atletico for the second time in three years will play the Champions League final.

It is difficult to assess who is the favorite and it is likely that we will waitch a hard fight to the very end, just like two years ago, when the Los Blancos literally in the last seconds of the regular time, scored for 1-1 and took the game to extra time and in the end lifted the trophy.

Another Madrid Derby to close the season as the Champions League final is here. Los Blancos are looking for their #UnDecima , meanwhile Atletico Madrid players are searching for the vengeance after the dramatic final two years ago where they got smashed 4-1 in the Extra Time. Los Colchoneros are also trying to make history by winning their first Champions League trophy.

Back in 2014 , Real Madrid managed to win 4-1 after the extra times. Los Blancos were down to 1 goal until the 94th minute when Sergio Ramos header found the net and sent the match into extra time. The rest of the game had no history as Gareth Bale , Cristiano Ronaldo and Marcelo’s goals gave to Real Madrid la decima.

Diego Simeone has classified the final at San Siro as a new opportunity instead of a revenge of what happened back in 2014. Cholo Simeone with his Atletico  based on their defensive and counter attack abilities has outplayed many big teams this season like Bayern Munich or Barcelona. Los Colchoneros eliminated Barcelona on quarter finals are winning 2-0 at Vicente Calderon – and they’ve eliminated Bayern Munich on semifinals on away goals.
Atletico Madrid finished third this season on La Liga , only 3 points away from Barcelona. But anyway, Los Colchoneros have demonstrated their great defensive abilities as they kept 24 clean sheets on the whole season. Meanwhile Real Madrid got that record on the Champions League , as Keylor Navas has conceded only 2 goals vs Wolfsburg away on quarter finals – which Cristiano Ronaldo managed to turn the things around with his hat trick on Santiago Bernabeu.

Zinedine Zidane is making history for Los Blancos. The French manager has reached the Champions League final on his debut as a manager [less than a season to be fair]. Zizou was the assistant of Carlo Ancelotti back on 2014 when Real outplayed Atletico Madrid on that final.

The Real Madrid fans are looking confident for the Undecima ahead of the final as all the eyes are on BBC – Bale, Benzema, Cristiano. The Portuguese star has scared all Los Blancos after leaving the training days ago with muscle problems. Cristiano admitted that he also was scared at the first moment, but he would be present on the final.

The only Real Madrid player to miss the final will be Raphael Varane. The French defender has also been ruled out of the EURO’s due to a thigh injury.

On the other side, Simeone doesn’t have major injury concerns as he will line up his strongest team. As always Diego Godin is expected to start on the centre of back four alongside the talented Gimenez. On the midfield Gabi and Augusto on the center – Koke and Saul wide , leaving Carrasco out of the starting line up since upfront there will be as always Griezmann and Fernando Torres. 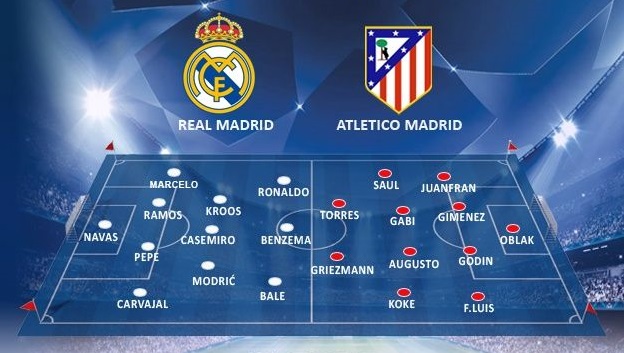