After 30 games played, we came to the finals of 14th European football championships and the final decision about the new champion of the old continent on Sunday evening at the Olympic Stadium in Kiev will bring players of Spain and Italy. 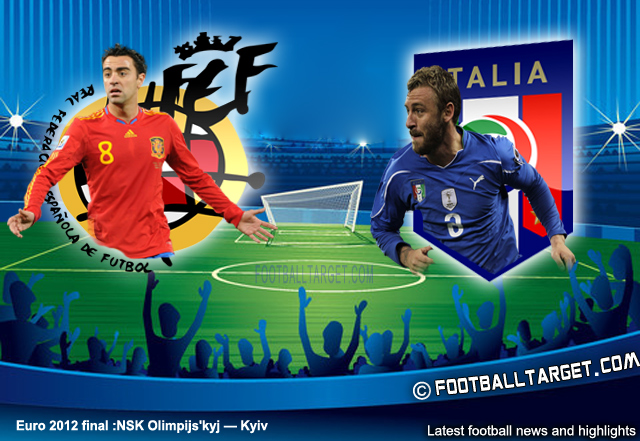 Specifically, they were better in the semifinals against the Portuguese (Match Highlights), and Germans (Italy (Match Highlights), so that once again it is repeated the situation in the big Final match will play teams that were together in a group, and here we must add that their first match in the group has finished with 1-1 result (Spain 1-1 Italy match Highlights) .

Otherwise, at the last Euro these two teams have met in the quarterfinals, and then after penalties Spain was better, and while less than a year ago they have played a friendly match in Bari, where the Italians celebrated with 2:1.

Of course all these results now do not have too much weight, because what is really important noe is the current form, and she tells us that the current European and world champions should be very concerned before the final match, as in the past five matches at the Euro 2012 they did not show some brilliant game.

However, only a little easier to victory they came against the Irish, while France and Croatia gave them much trouble,while the matches against Italy in the group stage and against Portugal in the semi-finals are some different story.

Namely, already in the first round against Italy,Italians showed they have the right answer to the constant passing in their game,or famoues tika-taka. Match eventually finished 1-1, while against the “neighbors” the Portuguese they looked completely harmless, for what certainly the largely credits go their opponents, who defended well throughout the 120 minutes of play.

However, in the end the luck was an ally of the Spaniards and after a penalty shoot-out they managed to win their third consecutive final at the biggest competitions which until now, only the Germans manage to achive, so now provides for them a unique opportunity to reach yet another trophy in the series, with which they would became the first team in the history of football who manage to do so.

But for something like that ,Spaniards have to provide their best game on the Euro, as on the other side will be extremely unpleasant Italians, for whom we have already said that they had outwitted them in the group stage.

Therefore it is quite realistic to expect that Del Bosque now send F.Torres to the pitch from the first minute, which would only gave more space to their midfield players to show all creativity they have, which is actually the strongest weapon of the team.

Unlike the Spaniards, Italians as the tournament progressed, more and more raised their form, and so after a draw with Spain and Croatia in the group stage, in the decisive third round routinely done a job against the Irish, and than in the quarterfinals against England, and especially in the semifinal against Germany they have showed their best “face”.

Though, in a meeting with the English they had no luck to score in the regular time, so that after 120 minutes of play nets remained intact. On the penalty shoot-out the Italians showed more composure than their opponents and with 4-2 result they accrued equity in the semifinals .

And when all expected that against the mighty German machine ,Italinas will finally falter, there was the opposite situation, primarily because the coach Prandelli completely outwitted his counterpart J.Low, where he set the Italians extremely aggressive and offensive, which already after 45 minutes of play was very worthwhile.

Specifically, they used the errors in the opponent’s last line very well, especially here we think on great Balotelli who twice escaped their keepers, and so to his team brought a great advantage of 2:0.

In the following of the meetings they stoically lodged the attacks of “Elf,” and even on several occasions have had more excellent opportunities from a counterattacks to increase their advantage, but they were not sufficiently concentrated, so in the referee´s compensation extra time compensation came a punishement from the penalty where safe shooter was Ozil for the final score 2-1.

However, there was not enough time that this goal change something important, so that the Italians now have the opportunity to come up to their second title of European champions, but only if they manage to outwit one once again favored Spaniards. It is expect that Prandelli will revert the formation to 3-5-2 , especially after the when after suspension in the team returns Maggio.

1.Regardless of what Italy on this championship from a match to match were better and better ,and that many are now inclined to believe that they could even come to the end, we still stand by the statement from the beginning of the Euro, when we told that the Spanish at this point are convincingly the best European team, and somehow believe that at this final match they will offer, and theirs best game at the tournament.Spain to became the new old/new champion.

2.Our second bet refers to the number of goals, where many also believe that this should be another very boring and hard games, but we expect a different scenario here, especially as the Italians already in previous matches have shown that they no longer play defensively as before , and the Spaniards with Torres will probably be much more lethal.Over 2 goals

3.Since this is a great Euro finals, this time we give a third, a special bet, primarily because at this point it seems quite logical, given that fantastic Balotelli with one more goal has a chance to win the title of Euro 2012 best scorer, so he will probably do everything to finally reach this prestigious award.Balotelli to score.