The London club, Arsenal have officially confirmed the signing of the Chile international forward Alexis Sanchez from Barcelona in a €40 million [£32m] deal. 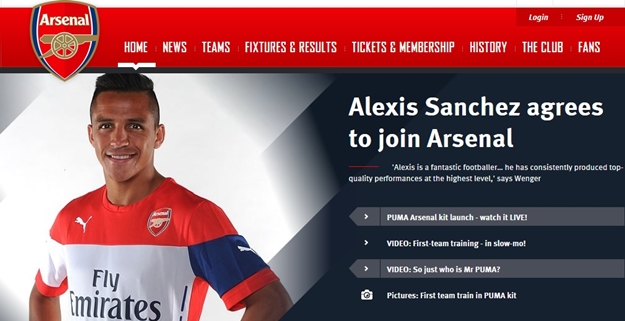 What was rumoured recently a lot, ended as predicted. Barcelona wanted to sell Sanchez to raise money for Suarez and to the Catalan club have accepted the Arsenal offer and player himself decided to join Gunners. Alexis had an offer from theItalian champion, Juventus, but the call of the Premier league and Arsene Wenger was a priority for him.

The New Gunner will join his new team-mates in late July as he given a rest after the World Cup campaign with Chile, while his debut is set for the Emirates Trophy in early August.

“I’m so happy to be joining Arsenal, a club which has a great manager, a fantastic squad of players, huge support around the world and a great stadium in London,” Alexis told the club’s official website.

“I’m looking forward to meeting my new team-mates and to be playing for Arsenal in the Premier League and Champions League. I will give my best to Arsenal and want to make all the supporters happy.”

” Everyone could see during the World Cup that Alexis is a fantastic player and we are delighted that we signed him. With him will be more creative and better,” said Arsenal manager Arsene Wenger.