Barcelona on the back of a 3-2 win at Atletico Madrid and securing a place in the Copa del Rey semi-finals welcome high flying Villarreal who are on a run on 18 unbeaten matches, but visit to Camp Nou could end this run, where Marcelino Garcia Toral’s side celebrated only once from their last 13 trips. At the first half of the season at the El Madrigal Barcelona entered a minimum 1-0 win. 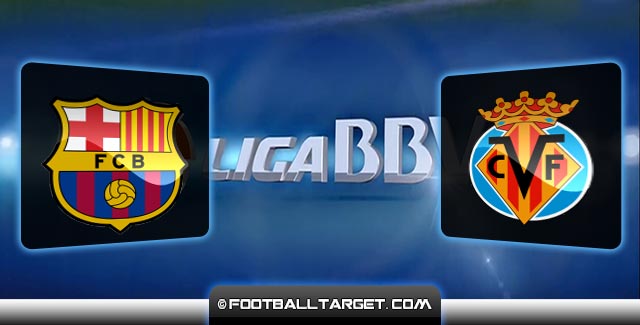 Barcelona is playing better and better, both in La Liga and other competition like Copa del Rey in which Blaugrana eliminated Atletico Madrid this week and made a huge step towards winning the Copa del Rey title. At one point of the season there have been much talk about the crisis in Barcelona, the quarrels between Leo Messi and Luis Enrique, but obviously it is all in past now and the Catalans continue to hunt the league leaders Real Madrid who without Cristiano Ronaldo with a comeback celebrated a 4-1 win over Real Sociedad this Saturday.

Enrique’s side in a short period three times defeated the reigning champion Atletico Madrid, club with which they had a lot of problems last season. These three wins certainly boost even more Barcelona’s confidence where Brazilian Neymar and Lionel Messi are playing very good, making assists and scores in each games. Duo boosted by Luis Suarez makes Barca so deadly this season. The only weak part of the team perhaps is a defence, but Barca still conceded the less goals in the league.

And While Barcelona is in great shape, Sunday’s opponent, Villarreal are on a run of 18 unbeaten games, so Luis Enrique was careful in the pre match interview:

– Villarreal’s run of unbeaten 18 consecutive games is a spectacular series that only confirms how much the quality this team have.

Marcelino from Villarreal made a great team that have head and tail, and although we respect their series at the same time we hope that we can stopped the same.

As for injuries, apart from Vermaelen and Douglas, Enrique doesn’t have any more problems with injuries, so the question is whether Barcelona in general have a weak point at the moment.

The Yellow Submarine did not lose any match since the beginning of November last year, when they in just four days lost to Zurich in the Europa League and Valencia in La Liga. Since then, in the championship they played ten matches, and two more in the Europa League,six in the Cup and all without any defeats. A Total of even 18 games, which is currently one of the best series in Europe, so that Villarreal at the Nou Camp comes with a lot of confidence.

In the two quarter-final matches of the Copa del Rey with 1:0 Villarreal beat Getafe, while in the championship they beat Athletic and Levante, also without conceding any goals.

Villarreal made a bit of changes in the team at this winter transfer period, so Campbell from Arsenal came on a loan and has already debuted in the Cup, while in the opposite direction went stopper Gabriel Paulista. Cani and Espinosa also left the team, while the stopper Bailly is currently on Africa Cup of Nations.

Joel Campbell presented after signing on loan for Villarreal from Arsenal.

Marcelino on Barcelona : “We and they are in a great form currently, but it’s hard to even compare us and Barcelona.

Their potential is enormous. Barca in their ranks have some of the best players in the world and I think that on this point it is impossible to compete with Barca.

But no matter, we are aware that the possession would be approximately 70-30 in their favor so our mental strength could be a key fact in this game.”