On Tuesday evening, starts the second round of the group stage at the World Cup held in Brazil, where the host , Brazil in derby encounter of the group A will play against their old rivals, Mexico.

Both teams in the first round celebrated, as Brazil with a 3-1 were better than Croatia and Mexico with a 1-0 win overcome Cameroon, so that the three points from this match will practically be enough to reach the knockout rounds.

The last match between Brazil and Mexico was played exactly one year ago, at the Confederations Cup in Brazil, and Brazil celebrated a 2-0 win. On the Olympic games Finals in London, in 2012. Mexico managed to grab a 2-1 win thanks to Peralta. 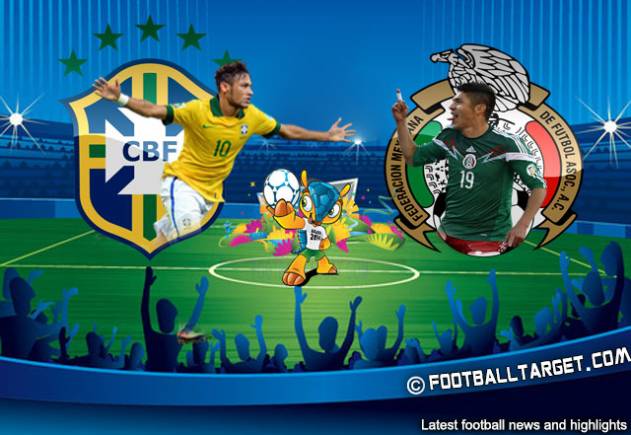 Luiz Felipe Scolari’s men are the obvious favorite in this match especially since they are playing in front of their fans whom on the opening World Cup game against Croatian throughout the match gave a tremendous support from the stands.

However, we can not but mention the traditional sympathy of the referees to the World Cup hosts which was shown in Brazil as well. During the 1:1 result , Yuichi Nishimura awarded one at the least suspicious penalty, while later on he even canceled one regular goal for Croatia, according to many.

In addition, it should be noted that in the first half of the match with Croatia, Brazilians first star Neymar probably should get a direct red card for a deliberate hitting Modric with his elbow , but Nishimura gave him only a yellow-card, which later resulted in two goals which this great attacker scored.

Of course, that Nishimura’s decisions changed the flow of the game, especially since the Croats took a lead first, with an own goal of Real Madrid’s defender Marcelo.

Still, without above mention Nishimura’s errors the Samba Kings were a better team on the pitch for the larger part of the game, and possibly they would score at least one goal by themselves. That was their 10th consecutive victory, which means with a lot of confidence they await their second group match with the Mexians.

As for the lineups, we believe that Scolari to pitch will send the same 11 players who played against Croatia where Hulk only remains a doubt due to injury and if he’s not playing then Bernard probably will take his place on the right-wing.

Unlike Brazil, Mexico’s team deservedly won the first three points at World Cup, because in the first round match the Mexicans in all segments outplayed the team of Cameroon.

Moreover, they even have the right to be angry on refereeing , as apparently two regular goals they scored were canceled , but since they won the game, their “case” of the bad refereeing is not so pointed out.

They are aware that now the two biggest challenges are expecting them, primarily in the encounter with the favored host, so it is expected that the coach Herrera, this time sets more defensive tactic, all with the aim to take at least one point from that game.

Still, even if they lose the game with Brazil still a game with Croatia awaits them and they could still reach the next stage.

As for the game with Cameroon, Herrera surprised a little with formation 3-1-4-2, which somehow at first glance seemed quite defensive, but it turned out completely the opposite , especially since the two side players, Aguilar and Layun were extremely movable and had a large share in the offensive part of the game.

The young striker Dos Santos used greatly advantage his opportunity from the start in relation to the much more famous Hernandez, while experienced Peralta once again confirmed his quality when he scored the only goal of the match. Peralta was the scorer for Brazil on the Olympic games also, so Brazil defenders surely will be more careful with defending him.