After 48 games played within a group stage of the World Cup in Brazil, this Saturday starts the knockout phase where in the first match of the World Cup 2014 round of 16, the host, Brazil will face another South American side, Chile at Estadio Mineirao. 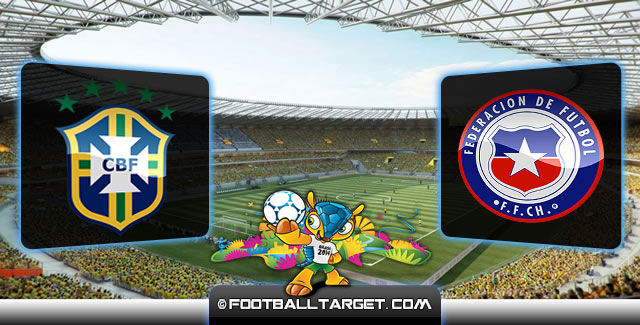 After investing a lot of money in organization of the World Cup, Brazil as the host stands for one of the biggest favourites to win the World Cup trophy. The Group A stage Brazil finished on the first place having 7 points , the same as Mexico who finished on the second due to slightly lower goal difference. Scolari’s men in the opening game against Croatia, had a lot of problems and were trailing behind until the last twenty minutes, when pushed by the Japanese referee Brazil pulled a comeback and won the game with 3-1. In the second match Brazil drew with Mexico 0-0, where the Mexican goalie Ochoa was having his day, while in the third game against Cameroon the Samba Kings have shown a progress in their game and celebrated a 4-1 win.

What Brazil have shown in the Group stage is not a lot, as everyone expected a much more from the nation who invented football. Dependence on Barcelona striker Neyamr is obvious, and the Samba Kings would have to show much more if they want to avoid the knockout elimination by Chile.

Scolari in the first three games didnt change the starting lineup, so we don’t expect any changes.

Brazil and Chile played a lot of mutual games, but we will point out only the last 10 games, in which Brazil enrolled nine wins over Chile, including the high 3-0 at the last World Cup, also in the knockout phase.

As for Chile, in the group B with Spain and Netherlands, no one gave Sampaoli’s men some big chances of reaching the last-16 stage, still led by Sanchez and Vidal, Chile after trashing aside Australia 3-1 knocked the European and the current World Champion, Spain 2-0 and sent the Spaniards early home.

Chile train ahead of Brazil test

In the last group match and the clash for the first place against Netherlands, Chile lose 2-0 and shown some weakness, which the Samba Kings will look to take advantage of it. It must be said that the most important player of Chile, Juventus midfielder was given a rest due to injury, so that for sure made an impact to defeat against the Oranje. Still, Vidal will be ready for the clash with Brazil and Sampaoli will send the strongest team to the pitch.

Match prediction : Brazil are the hosts, which means that the Samba Kings will have a big support from the stands. 12 years unbeaten run against Chile, who shown oscillations against the Oranje, speaks a lot. Brazil to progress, while over 2,5 goals seems good too.