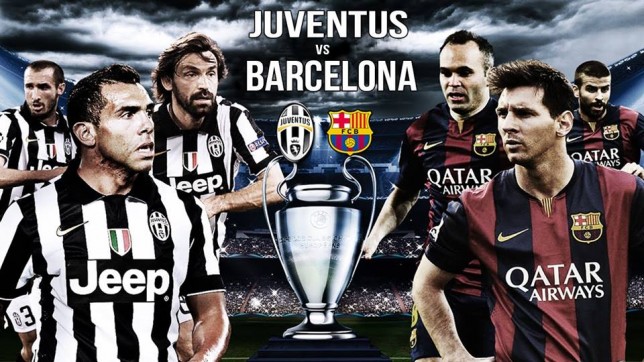 Finally, after endless anticipation, the UEFA Champions League Final is here and at the Olympiastadion stadium in Berlin both Juventus and Barcelona will try to win the famous treble after already winning domestic competition and the Cup.

After already claiming domestic doubles both Juventus and Barcelona in Berlin will look to write a new football history. There is only a small number of teams which managed to win “treble”, and while Juventus aim to win it for the first time, Barcelona aim to repeat the success from 2009 when under Pep Guardiola the Catalans have won it.

Further as every finals has something special, what can be pointed out at this one for the “special” is a hunger of both teams to win the title. Juventus could lift Champions league trophy for the third time, but the last one that Bianconeri have won was way back in 1996.

On the other side, Barcelona failed to win any trophy last year, and the same hunger for trophies is easily seen. The fact they spent a lot of money to boost their team, landing goalkeepers, defenders, midfielders and strikers suggest the same.

It’s unusually given how repetitive Champions league is that Juventus and Barcelona haven’t met in the last 12 years, so while many can predict many things on the same level they could not now what to expect.

On the other side, the Italians are well known for their top-level defence and Juventus despite having some class players like Tevez, Vidal, Pirlo or Pogba is known for the same. Exactly the Bianconeri’s defense led them to the Champions league Final in Berlin.

For a few years Juventus is a complete owner of the Serie A. Four titles in a row, suggest the same, but given a quality drop of Serie A and other Italian team, that should not surprise anyone.

And while Juventus is doing just fine in Serie A, in the recent years Juve failed to make a bigger impact in the Champions league competition, until now.

The Bianconeri boss Massimiliano Allegri, after taking a hot-seat proved him self by giving the team something extra, as now a former boss Antonio Conte has taken a job of the national team of Italy. Allegri had more “good” experience with AC Milan, and the same he brought to Juve who looks a solid team.

Perhaps the key thing in Juventus’ success this year is the first team in which there are many stars like Vidal, Pogba, Pirlo, Tevez, Chiellini, Buffon. The Bianconeri are not any more the team from which the key players look to move out. Still, if they do want, Juventus’ financial situation is a much better and they can sign another good player, as they recently did by signing Serie A star Dybala from Palermo for €40million.

As for their Champions league campaign this season, Juventus on their way to Berlin knocked Borussia Dortmund, the most pleasent surprise this year AS Monaco and the reigning Champions league winner Real Madrid. The last one could be a crucial one given the fact that they know how to play against the Spanish teams.

Juventus look ahead to the Champions League final.

Aside from Champions league, Juve have done a wonderful job in Italy by securing the new Serie A title and the Coppa Italy trophy. Dominant is one word to describe Juventus’ season so far. To make it even better remains only a one game, against Barcelona and the famous “Triplo” celebration could start. It won’t be any easy task for the Italian side especially as Giorgio Chiellini is set to miss this encounter, but Allegri aside from that doesn’t have any other major injury problems, and he believes that Barcelona have weaknesses of their own.

“We need to be good against a great team but, like all teams, they do have faults – and weaknesses,” he told reporters on Friday.

“How do you stop Barcelona? We need to think how to score. We need to be technically skilled because they’re a technical team and attack is their best weapon so we need to be very, very good at that.

“We must stay concentrated for 90 minutes. We need to be mentally strong and turn things around, because we’re second favourites to Barcelona.

“But the team is very calm and focused. It should be a great game; as with all Champions League finals, we’ll need some luck, and we’ll need to work for that.”

“We’re very sorry for what happened to Chiellini but I guess it was meant to be,” the former AC Milan boss stated.

“We lost a player who had been great for us since the start of the season.

Despite believing in his team Allegri admits that he considers as well and a defeat and that the same won’t be a disaster for Juve.

We started this season with an important objective – to get to the quarter-finals,” he added.

“Now we’ve got to the final, and we have to be first.

“But regardless of the outcome tomorrow, we’ve had an extraordinary season; apart from the league title and the 10th Coppa Italia, which had been missing for 20 years, we have to consider the consolidation of the team.

“This is important because it’s important to build some momentum in Europe.

“But of the two teams will win a treble in Berlin, either Juventus or Barcelona. Hopefully us.”

Barca bounced back in style after the last season where the Catalans have failed to win any trophy. Enrique’s men last weekend took the Copa del Rey, the week before that Barca have won La Liga title and against Juventus they aim to win the Champions league trophy for the fifth time. Many see Barca as the big favorites, and we can only add, rightly so.

In their Champions league season 2014/15 campaign Barca have lost only two game. The first one was in the group stage against PSG in Paris, 3-2. Still Barca finished on the top place of their group and later on, the Catalans have knocked three champions ( Man City, PSG and Bayern Munich) before reaching Berlin.

Catalans finished the season in style, looking at all the competition in the last 22 appearances Barca enrolled 19 wins, two draws and one defeat, and that defeat came in the second leg match against Bayern Munich when it was all settled, while the last draw was in the last La Liga round when Barca have already secured their new league title and thus Enrique has sent somewhat mixed team to the pitch.

Barca is now the favorite, but Juventus showed their quality in the semifinals at which Gerard Pique points:

– Juventus is the Italian team, but this is a team that likes to “play”, who likes to have the ball in their possession.

They showed that in the semi-final against Real Madrid at the Bernabeu, which is one of the most difficult stadiums to play where guests are always under a lot of pressure. I expect from them to play against us in the same way.

But we are not afraid. We love to have ball possession, but recently we have shown that we can threaten opponents and with some counter-attacks.

Barca is now the favorite, but Juventus showed their quality in the semifinals at which warns Gerard Pique:

– Juventus, the Italian team, but this is a team that likes to “play”, who likes to have the ball in his possession.

They showed that in the semi-final against Real Madrid at the Bernabeu, but it is one of the most difficult stadiums to play where guests are always under a lot of pressure. I expect us to play against in the same way.

But do not be afraid. We love to have ball possession, but recently we have shown that we can threaten opponents and counter-attack.

Luis Enrique was as always cautious in announcing the finals:

– Yes, you can feel the euphoria, but primarily among fans. Players and headquarters are maximally concentrated on Juventus.

Everyone is talking only about our attack, probably rightly, as Leo, Neymar and Suarez this season played fantastic. But to win the title all the lines need to play at a high level, the GK’s, defense and attack.

Luis Enrique doesn’t have any injury problems and as usual Bravo who plays in La Liga only will let his place at the goal to Ter Stegen.