Derby meeting of the Group “A” will be played in the second round and it was expected that both of these teams enter into the match with three points on the account, so that the winner of this game is already practically certain for the quarterfinals.

However,that scenario failed,as the Poles in the match with Greeks took only a point,while Russia has done its job with style, and now may be a lot calmer, knowing that with victory in this match,definitely goes in the quarterfinals.

It is interesting that these two teams so far met only once, in a friendly match,where Russians have a lead of 2-0,but the matchended 2-2,and it was played in Moscow,2007. 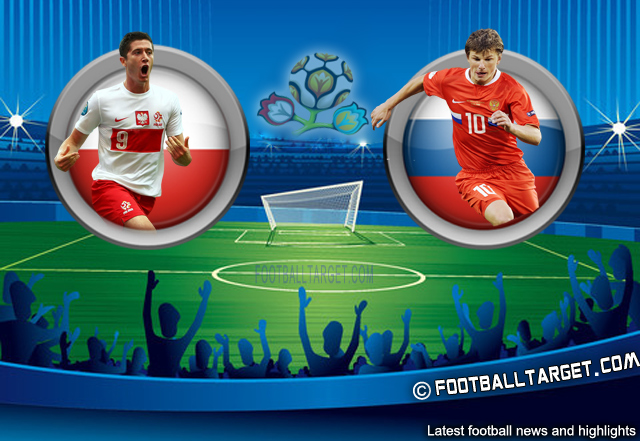 Poland with a draw in the first round ,have joined to a number of hosts that in the opening match of a major competition, “burned out” from excessive desire and fail to win.

Poles are, however a different story, because the game with the Greeks had an unusual course, and at one point seemed to be a conclusive triumph for Polan, but,also,at some points they could even lose the match. Taken all together they could be satisfied with one point from that match (Poland 1-1 Greece Highlights).

They set off on the wings of a full a stadium decisively, took the initiative and created lot´s of opportunities, and quite early took the lead. First lineup on the field was no surprise, where just Murawski started at defensive midfield instead Dudka, which is not a special change.

Almost all the attacks went trough the right side, which again is no surprise, because in this part of the team is operates great “axle” from Borussia Dortmund, Pisczek-Blaszczykowski-Lewandowski.

Thus has fallen and the goal, assistant was Blaszczykowski and Lewandowski scored with his head. The opportunities,still,they have a lot, and the referee helped to them when he sent off,Greeks defender little too harsh, and all was opened to them.

However, Poland has shown that it is not mature enough for big achievements. They conceded a goal with a player more, and they could concede one more, but fortunatly for them they did not. In both cases, their defense reacted badly.

In the second situation, goalkeeper Sczesny had to offend penalty for which he received a red card, and among the goal post had Tyton, PSV goalkeeper, who was actually only the third option, but due to injury of Fabianski ,Tyton got the chance.

He defended the penalty and is now the hero of the nation. It is interesting that in addition to this forced substitute,coach Smuda nothing else changed, and this can only mean that he does not have confidence in the reserve players. Against the Russians will have to “wake up” and left side, and above all Obraniak and Rybus, to be more dangerous, and the defense has to be safer.

Selection of Russia after the first round can be very satisfied. It was an example of how to open a big competition in the group in which you are declared for a big favorite, and furthermore you have big ambitions and after the group stage.

Selector Dick Advocaat did not experimented and simply on the ground sent a team which was playing in the recent friendly matches. A little surprise is perhaps only Malafeev on the goal, although he and Akinfeev actually had equal opportunities .

More important was a great tactic where the Russiand to Czechs leave the initiative in the midfield, where were brilliant Denisov, Zyryanov and Shirokov, who were covering all, and then seized balls quickly distributed forward to this time unstoppable Dzagoev who justify the title of one of the potential young stars of European championship.

Shirokov has also managed to score, while Arshavin was on his level, so only really failed ,Kerzhakov. There , however, Russian showned the power of their team, when Pavlyuchenko replaced Kerzhakov and for only 20 minutes in the play he manage to score and assist for one goal. (Russia 4-1 Czech Republic Highlights )

The defense was not on some special temptations, but we can say that it is still the weakest part of the team. Against the Poles will be much harder for them,and after that match their defence will get a proper “evaluation”.

Specialy the left side hold by Zhirkov will be on the “under fire”, mainly because the opponents attack by his right side. Advocaat definitely will not change anything, not even Kerzhakov, although Pavlyuchenko is quite ready.

Prediction : The results of the first round are such that Poland is the team that has to take the game here and look for victory. This is precisely what suits for the Russians the most,so they can again apply similar tactics like against the Czech Republic.

Poland has shown that it can be dangerous, but also very vulnerable, so with the point they have to be satisfied. Neither to the Russians the draw is not bad, but certainly even the smallest opportunity given by the Poles they will use to secure their placement in the quarterfinals.