Group stage is finally over , and the world cup is going forward to the next stage. Today it starts the knock out stage , with 16 teams fighting to reach the Quarter-finals of the competition. After being the second team who finishes the group stage with full points, Group C winner Columbia will face Uruguay tonight. Uruguay who finished second in Group D will be without their superstar , Luis Suarez after the ban he got from FIFA. 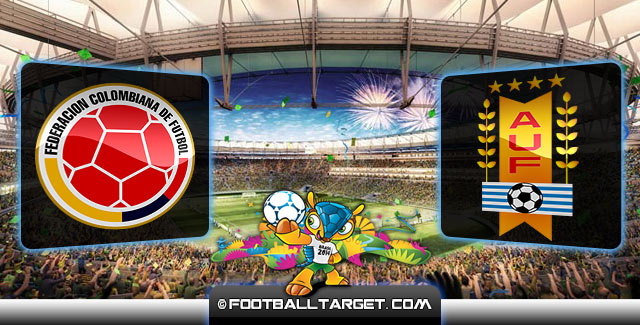 Colombia
Jose Pekerman side who has been without their star Falcao in this World Cup , has changed the formation to a 4-2-3-1 wich worked perfectly in the group stage as they was the leaders of the group with 9 points.

Colombia got a solid defense and a deadly attack. Zapata , Yepes and Armero worked very well in the defensive phase. Meanwhile in the attack James Rodriguez has been the key player. James Rodriguez has improved too much recently , as he’s one of top attacker , scoring/assisting 5 goals , like Benzema.

“It’s impressive to see how James has improved. I knew him from FC Porto and I see that now in France he has matured so much,” Jackson Martinez told FIFA.com.

“The talent he has is something that cannot be questioned. He is having a great tournament.”

Too much is expected tonight from Fiorentina winger , Cuadrado who has also shined with the 4-2-3-1 formation that Peckerman adapted lately.

Uruguay
The South American had a really interesting group stage. They lost the opening game vs Costa Rica 3-1. They beaten England 2-1 at the second game of the group , thanks to Luis Suarez goals. Uruguay secured the second place thanks to Godin late goal in their match vs Italy. Italy played with 10 players for 30minutes after a red card for Marchisio.

Uruguay will face Colombia without their top striker , Luis Suarez after he got banned for 4 months/9 international games after the bite on Italian defender , Giorgio Chiellini.

Another problem for Tabarez may be the knee injury of Lugano. He must also decide if he’ll be playing Cavani alone up in the front , of he’ll form a couple with Diego Forlan.

Last time this two teams faced each other was in September 2013 where Uruguay won 2-0.

Both teams faced 38 times each other , Uruguay winning 18 of them and Colombia only 11 of them.

Colombia is unbeaten in their last 10 matches.